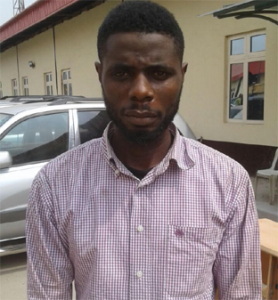 The operatives of the Lagos State Task Force had arrested a man Soji Gboye who impersonated to be a journalist with a media outfit (TVC Continental).

Disclosing this to newsmen on weekend, Chairman of the Agency SP Olayinka Egbeyemi said the suspect who lives on No 5, Adesoye Street, Mende, Maryland, Lagos, was arrested while obstructing the personnel of the Agency from performing their legitimate duty around the area.

Soji was arrested alongside 67 miscreants and hoodlums during an enforcement exercise carried out in Maryland area of the state.

The Chairman also said traders selling or displaying wares/goods at unauthorised places were dislodged during the exercise.

According to him, the 36 years old from Ilaje, Ondo State who claimed he was a correspondent with the media outfit could not properly identify himself when interrogated by the Chairman of the Agency.

SP Egbeyemi who was one time Deputy Police Public Relations Officer (DPPRO) immediately Investigated further with the management of the media outfit but it was discovered that he was not a staff but an impersonator.

It was gathered that upon interrogation, it was discovered that he was not a journalist and he had never worked with a media outfit.

Mr Gboye who said the Agency should have mercy on him however acknowledged the braveness of the Chairman of the Lagos State Task Force SP Olayinka Egbeyemi as an intelligent Nigeria Police Officer.

Meanwhile the Lagos State Commissioner of Police Mr. Garuba Umar has directed that all the 67 suspects be charged to court while the fake journalist be transferred immediately to State CID, Panti Street, Yaba, Lagos.

SP Egbeyemi who said the Agency and other security outfits would not relent at getting rid of criminals and hoodlums however enjoined members of the public to always furnish security outfits with useful information on criminal activities across the State.