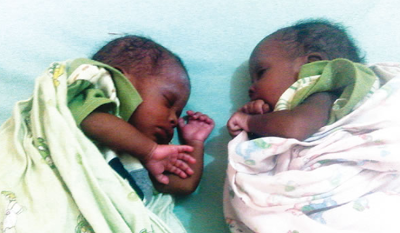 Father of the twins abandoned by their mother in a Lagos hospital over unpaid bill, has vowed never to take back his wife as she allegedly lied to him.

Adeyemi Ademola, disclosed how his ‘run-away’ wife, Sarah Ademola deceived and misled him.

He also revealed plans to relocate from his current home.

Ms Ademola on December 16, gave birth to a set of twins at the Felken Maternity Centre in the Somolu area of the state, but she absconded, leaving behind the two newborn girls at the facility due to the inability of her husband, Adeyemi Ademola, to pay the sum of N150, 000 owed the hospital.

The woman claimed her disappearance from the health facility was as a result of her husband’s inability to settle the hospital bill.

After the news of their inability to offset the hospital bill circulated, well-meaning Nigerians indicated interest and rose to their aid and settled the outstanding bill.

Ademola made his decision known weekend at the Pedro Police Station, Somolu, where he had gone to claim the babies.

According to him, his wife deliberately deceived him that she had only two children whereas she already had six.

Ademola pleaded for assistance from Nigerians for their upbringing, dismissing reports that Sarah had returned to him.

Speaking before newsmen at the police station, Ademola said, “To set the records straight, my wife has not showed up since she fled on the 16th of December last year.

“Now that Good Samaritans have intervened, by paying the remaining balance on the N150, 000 bills, she is willing to come back. My question is, coming back to do what, when she had already said she didn’t need the babies.

“Coming back to the children could be very dangerous, so we are not going to take her back. All we need is assistance from Nigerians to raise the children.

“Iya Ibeji (mother of twins) deliberately deceived me that she had two children whereas she has six. After the delivery of the twins, she confided in her closest friend that she does not need the children that the death of her first husband and the responsibility of taking care of the children he left along with the new babies, would be too much for her to bear. That is why she left.

“I wish to relocate because the single room I am living presently at No.6 Odukoya Street, Bariga won’t be conducive for the new babies. Reports that we received donation from the Wife of the Lagos State Governor is a rumour, there was nothing of such.