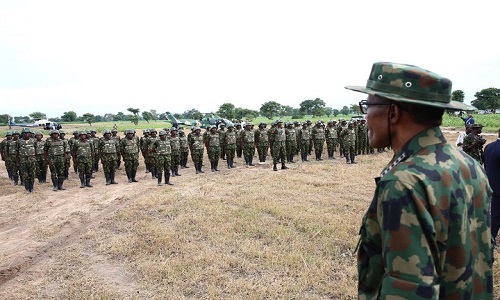 Troops of the Nigerian Army on Wednesday night prevented an heavy onslaught on the military base in Yobe State by members of the
dreaded Boko Haram terrorist, who attempted to take over the location, the PREMIUM TIMES has reported.
The terrorist, it was gathered stormed the base in Kamuya at about 5:30 p.m. in large numbers with heavy artillery shooting sporadically from several locations for almost an hour.
This, reports said caught the soldiers unaware making them to withdraw initially into the base.
The military quickly scrambled reinforcements from the nearest base in Buni Yadi which joined the troops and overpowered the terrorists after hours of intense battle.
Many terrorists were believed to have been killed in the fight while several others flee with gunshot wounds. It was also gathered that three soldiers lost their lives while some are still missing as at the time of writing this report