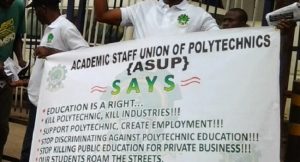 Despite a last minute effort by the Federal Government to stave-off a nationwide strike, the Academic Staff Union of Polytechnics (ASUP) has decided its members will down tools by 12 noon Monday, January 30, to press home the implementation of their demands.

The General Secretary of ASUP, Mr. Anderson Ezeibe, told the Daily Sun that lecturers in the nation’s polytechnics have been mobilized for the one week warning strike stressing that “we will withdraw our services, both academic and administrative jobs.’’

Ezeibe disclosed that no polytechnic is exempt from the national strike.

According to him, the Federal Government ought to have averted the strike if it had addressed the issues at stake when the union issued the first ultimatum on July 20, 2016 and another notification on November 14, 2016.

The ASUP leader confirmed that the Minister of Education, Malam Adamu Adamu, invited the leadership of the union to a meeting but warned that unless the issues in contention were addressed, the one-week warning strike will go ahead as scheduled.

Ezeibe said after the National Executive Council (NEC) in Abuja that the union served the Ministry of Education the strike notice last Thursday and that they wrote on Friday inviting the leadership to a meeting by 12 noon Monday.

The chairman of ASUP, Federal Polytechnic, Ado Ekiti, Mr. Tunji Owoye, said his members will comply with the NEC directive and that the congress of the union is scheduled for Monday. He explained that the management of the institution will be informed of the industrial action after the congress.

The Secretary of ASUP, Lagos State Polytechnic (LASPOTECH), Mr. Uthman, disclosed that a decision on whether to join the national strike will be taken at a congress Monday by 2 pm.

Among the issues raised by the union are the sustained poor funding of public polytechnics as reflected in the unimplemented capital grants, withdrawal of allowances since 2016, shortfalls in personnel allocations as well as non-funding of promotion exercises.

Other issues are the victimization of union officials, interference in union activities, non release of visitation panel reports, delays in the review of the Federal Polytechnics Act, non-commencement of renegotiation of ASUP/FG agreement of 2010, and tardiness in appointment of rectors of federal polytechnics.