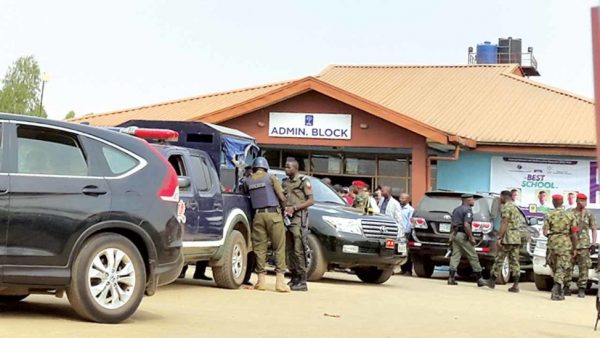 After nearly 48 hours in captivity, the abductors of students and employees of the Nigeria Turkish International College (NTIC) have demanded a whopping N1.2 billion ransom for the victims to be released.

Reports say the abductors called a family member of one of the victims yesterday to make the demand. According to detectives, calls have been coming in from the kidnappers, who have placed a N300 million ransom on each of the two Turkish nationals among the victims and N100 million each on the six other victims, including three females.

The gunmen invaded the school and took the students and teachers away in a white Toyota Hilux vehicle. They were abducted around 9:30p.m. on Friday, when the kidnappers dug through the fence and entered through a back door.

It was learnt that footage of the CCTV cameras at the school hostel indicated that the kidnappers wore masks when they stormed the hostel. One of them reportedly wore a skirt, but is suspected to be a man.

Representative of the Inspector-General of Police Ibrahim Idris, AIG Zone 2, Aderanti Kayode, and Commissioner of Police, Ogun Command, llliyasu Ahmed, had visited the school, saying the police authorities are on top of the situation.

Also, the Ogun State government has assured parents and relatives of the victims of prompt action to ensure their safe and immediate release. The Deputy Governor, Mrs. Yetunde Onanuga, who visited the school at the weekend, said: “I want to assure our people that they should keep calm, they will be rescued within a very short time. I know how they feel right now. The state government will not neglect them to their fate.

“And to the kidnappers, be warned that Ogun State is not a safe net for your nefarious activities. This is just an accident that can happen anywhere, but we will put strategies in place to ensure it doesn’t occur again,” she said.

In a related development, the federal lawmaker representing Okitipupa/Irele Federal Constituency of Ondo State, Prince Mike Omogbehin, has described the recurrent kidnap of monarchs in the country as an affront on the traditional institution.

Omogbehin stated this yesterday in Abuja while reacting to the foiled kidnap of the wife of the Abodi of Ikaleland, Oba George Faduyile, condemning it in strong terms.The Guardian gathered that a bandit of unknown men barged into the palace at Ikoya, in Okitipupa Local Council of the state and abducted the wife of the monarch, Olori Grace Faduyile.

Sources from the area revealed that the local hunters and folk in the ancient town sprang into action to foil the act; though not without violence, leading to the death of one of the kidnappers.

However, the monarch’s wife, who is a retired public servant and principal, was rescued from the abductors and returned to the palace unscathed. Omogbehin expressed appreciation to the people of the area, who summoned courage in rescuing the elderly woman from her abductors.

The legislator renewed his call on the police authorities to provide adequate security for traditional rulers across the country, noting that the foiled kidnap of Abodi’s wife is an abomination in Ikale kingdom.

The state Police Public Relations Officer (PPRO), Femi Joseph, confirmed the incident and said the police were on top of the situation, deploying the intelligence unit and anti kidnapping squad to arrest the culprits.

Meanwhile, the Department of State Security (DSS) has uncovered two routes kidnappers use to escape with their victims without any hindrance in Lagos State. The routes are located in two developing communities of Ijedodo and Ijagemo in Iba Local Council Development Area (LCDA) of the state.

The areas are said to be heavily guarded by armed men suspected to be members of the kidnapping ring. According to a source, it took a painstaking investigation and surveillance carried out for several weeks before the DSS could discover the routes and has been unable to do anything yet because of its sensitivity.

The two communities have common boundary with FESTAC Town and Ojo towns and they are surrounded by waterways, which make it easier for kidnappers to escape with their victims using speedboats.

The discovery, The Guardian learnt followed incessant abductions and kidnappings in the Ikotun, Ijegun and Isheri Oshun areas without traces. This had been of serious concern to the residents, who say the kidnappers have also built several tents in the suburbs, where they keep their victims for ransom.