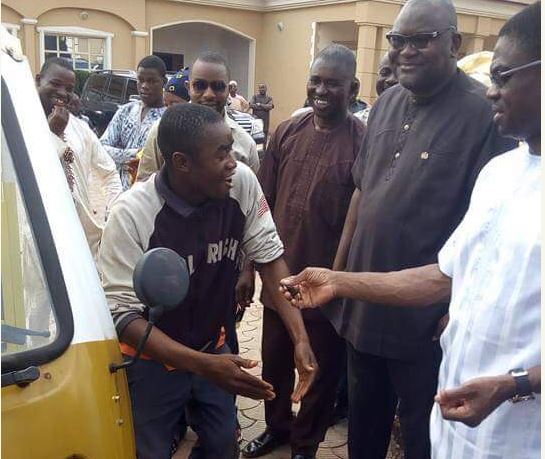 The deputy Governor of Edo State Rt Hon Phillip Shaibu has gifted two tricycles to Meres Andrew Sabage and Beshiru at a brief ceremony in his country home Jattu, Etsako West LG of the state. Sabage was the victim of the recklessness of Shaibu’s convoy on the Ogbona-Fugar road that resulted in an auto crash, Saturday. The Deputy governor visited Sabage on his hospital bed on Saturday and promised to replace his damaged bike and off set his hospital bills. True to his word, he fulfilled his promised Sunday morning shortly after worshipping at the St Phillip Nero Catholic Church, Jattu. The other beneficiary, Beshiru was also an accident victim who caught the attention and sympathy of the Deputy governor.