Police Arrest Pregnant Woman, 2 Others For Kidnapping In Lagos 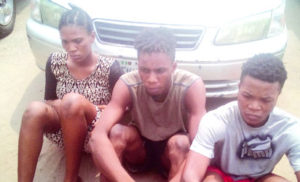 The Lagos State Police Command have arrested a pregnant woman, Eniola Kareem, 21, alongside her two accomplices, her husband, 23-year-old Paul Kareem and another suspect, Ayoola sodiq, 21, for their alleged involvement in the kidnapping of one Idris Saheed.

According to the Police, the suspects were arrested last week after they have successfully received the ransom of N100,000 paid by the victims parents.

Recounting how they planned the kidnap to the Police, the woman who claimed to be the mastermind said, the victim, (Idris) had been making advances at her and she thought she should that opportunity to collect money from his parents who are rich.

“One day,  during a telephone conversation with him, she said, he informed me that he was coming to Mowe and would like to see me since I lived there. I obliged him. Thereafter,  I muted the idea of kidnapping him because I know how rich his parents are. I told my husband about how we would kidnap him and tie him with a rope. I told him that when he comes to the house, I will do anything he wants. I planned the kidnap with my husband and his friend Sodiq and we demanded N100,000 from his parents before we released him.”

In his statement, Mr.Paul claimed he met his wife with whom they planned it together in a club where dances and they started dating.

He added that, “The person we kidnapped told my wife that he was coming to the house, thinking she was still single and that was what prompted the kidnap. We did not harm him or use any ammunition, it was a docile operation. The boy is gentle and cooperated with us . My wife told me that the boy is from a very wealthy home and that his father is a multi-millionaire but we only requested for N100,000 and we were paid three days later..  We are not real  kidnappers and we have not done this before.

“Immediately he entered the house to see my wife, we pounced on him and tied him to a chair and demanded that he should call his parents and tell them that he had been kidnapped and needed a sum of N100,000 to be released.”

Ayoola sodiq, the third suspect said, he was not part of the initial plan of the kidnapping, he only got to know about it later from his friend Paul whom he met at a club in Mowe Ibafo.

He said, “There he introduced me to this business and told me how he was planning to kidnap the victim. He called me and told me about his plan of kidnapping a young boy with his wife. She called the boy and when he came to the house, they pounced on him and told him to sit on the floor.

“After that, they called his parents and informed them of the kidnap demanding that they pay N100,000 to her husbands account . After the kidnap , I was given N30,000 while Paul took N40,000 and gave the left over which is N30,000 to his wife. The police tracked me and arrested me after they already arrested Paul and his pregnant wife and since then , I’ ve been in police custody.”

Confirming the arrests, Dolapo Badmus, the Lagos State Police Spokesperson said investigations are still ongoing and the suspects would be charged to court soon.