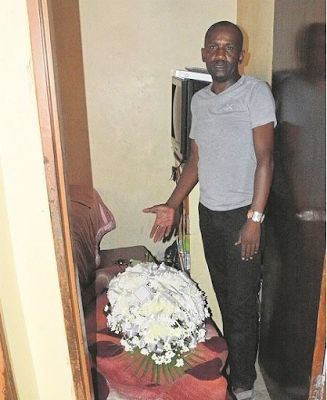 The police in Glen Norah, Harare in Zimbabwe, have arrested a prophet, Starlin Madzibaba, for his alleged involvement in fraud, fake prophecies and illicit affairs with female members.

The suspect was reportedly exposed by his driver, Norest Brian Muchecheti, who claimed he was fond of planting fake goblins and live snakes in people’s homes claiming that their relatives were bewitching them.

H-Metro is reporting that his driver made the revelation known to seven victims after he clashed with the prophet for bedding his wife.

Muchecheti, in his revelation, said “I am not married. I separated with my wife after she cheated with another man.

“I was Madzibaba’s driver and we visited many places until I discovered that he was faking miracles.

“After such trips, he would end up hooking up with ladies and booking lodges to have sex with them and this led me to get the truth from him.

“Many times his wife questioned why we were not returning home on time after the trips and I later disclosed his cheating habits to her.

“I felt happy when she seduced me and discovered that she was eager also to fall in love with me since she was sex starved.

“Madzibaba later discovered my illicit affair with his wife and he treated me badly that I was left with no choice other than exposing him to people he duped by performing fake prophecies.

“I have informed a number of people some are far away from Harare and I feel sorry for him if they all discover it because they lost beasts and more money,” Muchecheti was quoted as saying.

One of the suspect’s victims, Alec Gaviro, also recounted his ordeal, saying he lost more than US$200 after the prophet removed a baboon’s leg with charms planted in his house.

He said, “Problems lead us to consult these prophets but I want to thank God for allowing Madzibaba’s driver to confess what this fake prophet was doing.

“His driver told me that many people were being duped by Madzibaba and I discovered that he bought harmless live snakes from Snake Park and planted them at one of his victims’ home in Southlea Park.”