Swedish Brewery Makes Beer Specifically For Drinking In The Shower

A Swedish brewery has designed a double-strength mini beer specifically for consuming in the shower. 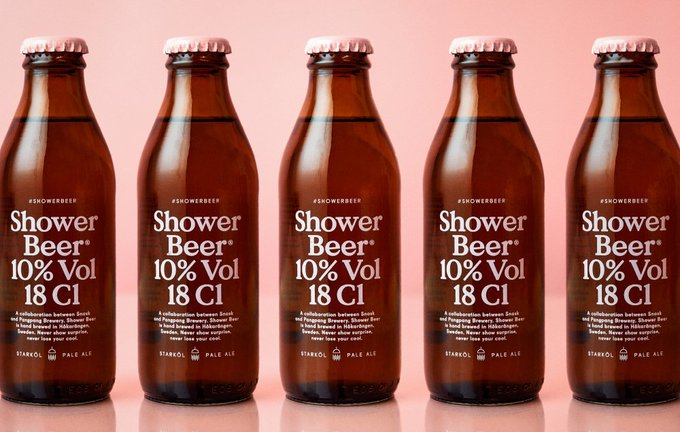 The product named “Shower Beer” comes to us from the Swedish craft brewery PangPang and the creative agency Snask, and it’s “a sweet but strong pale ale in [an] 18 cl (6-ounce) small bottle meant to gulp in three sips while standing in the shower getting ready for the night.”

PangPang brewery founder Fredrik Tunedal joked that there is something primal in the relationship between beer and the shower. “The idea for a Shower Beer is [a] universal thing, I think,” Tunedal told MUNCHIES. “As a brewer I work long and hard days, and when I come home I’m often covered in malt dust (my girlfriend actually calls me Mr. Malty Pants) and the shower is a gateway back to normal society.

“Looking through the hashtag #showerbeer it’s easy to see that people all over the world love that feeling of a hot shower and an ice cold beer. I just wanted to try to optimise the experience by trying to customise a brew for this glorious occasion.”

Tunedal says he let the Shower Beer ferment for longer so it could develop a taste that would be perfect for the showering experience.

“This lets it develop a soapy flavour that in some beers is considered an off flavor, but is just on point for the Shower Beer,” says Tunedal. “The beer is heavily hopped with citrus, and has a citrussy, soapy, and somewhat herbal profile,” he continued.

He also added that the beer can be used as a conditioner.

“I designed the recipe so that it can also be used as a conditioner, so if you are into looking good rather than feeling good, I’ve thought of you, too!” Tunedal said.

The Shower Beer, which was released last month, was meant to be a one-time-only offering, but thanks to overwhelming demand, a second run is in order, and Tunedal hopes it will become a more permanent offering including in the U.K. and U.S