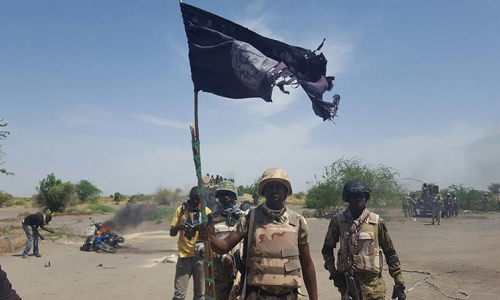 A Boko Haram terrorist suspected to be a foreigner has been captured by Nigerian troops in Rann, Borno State.

The suspect not yet identified by Nigerian military authorities, was among the ban of terrorists that staged an attack on Rann, the location of the Internally Displaced Persons Camp, that was accidentally hit by Nigerian Air Force jet on Tuesday.

The attack was a bad adventure for the terrorists.

Fifteen of them were killed by Nigerian soldiers.

The Chief of Army Staff, Lt.-Gen. Tukur Buratai, confirmed the killing and capture of the terrorists in Rann on Friday, when he paid an operational visit to troops of 3 Batallion.

Buratai said the insurgents came again to the town in two gun trucks on Thursday at about 6p.m. to attack, but were repelled by the soldiers, who killed 15, while others escaped with one gun truck.

He added that the troops recovered the other truck with weapons, including one General Purpose Machine Gun, three AK47 and ammunition.

Buratai recalled that the Tuesday’s incident, the Air Force component of the Operation Lafiya Dole based on intelligence that the terrorists had infiltrated Rann with intent to attack, deployed the rockets.

He, however, regretted that the weapons mistakenly hit IDPs camps in the town, killing over 50 civilians and wounding many others.

“Two of our soldiers were also affected in the unfortunate incident,” Buratai said.

He described the incident as unfortunate and big mistake.

“We have all learnt lessons from it.

“We will take note of this; the issue of coordination and passage of the right information will help to prevent such incident again.

“It is a mistake which can happen and it has happened in other places. We pray it never happen again,” he said.

The News Agency of Nigeria (NAN) reports that while addressing the troops, Buratai urged them not to allow the unfortunate incident to demoralise them.

He charged them to remain committed, dedicated and patriotic, assuring them that their efforts would be rewarded.

The chief of army staff also met with elders of the community and condoled with them over the incident.

According to the Commanding Officer of 3 Battalion, Lt.-Col. I. P. Omoke, Rann was one of the last towns retaken from the insurgents on March 22, 2016.

Omoke said since then, the terrorists had made five failed attempts to attack the town but never succeeded.

Rann, the headquarters of Kala Balge Local Government Area of Borno, is 175km from Maiduguri and 8km to the Republic of Cameroon.