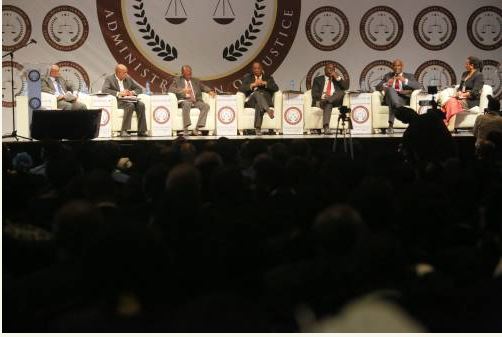 Nigeria’s Vice President, Yemi Osinbajo, on Monday, accused the Nigerian Police Force and judges for keeping suspects in prison custody longer than is legally permissible without trial. The Vice President made the accusation during the opening ceremony of the two-day Stakeholders’ Summit organized by the Lagos State Ministry of Justice, where he was represented by Mr. Abubakar Malami (SAN), Attorney-General of the Federation and Minister of Justice.

At the summit, holding at Eko Convention Centre, Eko Hotels in Lagos, the Vice President said suspects are kept in prison custody for as long as three years without being charged to court. The situation, he explained, has left over 47,000 suspects still awaiting trial in prisons across the country.

“As at 2017, we have 47,229 “unsentenced” detainees awaiting trial out of a total prison population of 67,586. It may interest you to know that Lagos State has the highest number of unsentenced detainees in Nigeria, according to a recent statistic released by the National Bureau of Statistics and Nigerian Prison Service released in 2015,” said the Vice President.

He noted that 85.9 percent of the Lagos State prison population is made up of yet-to-be-charged detainees, adding that the time spent in detention is dependent on the length of proceedings, which are usually extended because of incessant adjournment or lack of diligence by investigators. As solutions to lengthy prison custody periods, the Vice President called on the judiciary to embrace a daily trial system and sanction lawyers, who deliberately delay proceedings with the intention of stalling trial. He urged the judges and other relevant stakeholders in justice administration to diligently discharge their duties.

“If we can agree that these problems are against our collective interests as practitioners and stakeholders, then we must make a firm commitment to tackle the problems by changing our attitude and standing up for what is right,” he said.

The Vice President, who is a Senior Advocate of Nigeria, also accused some judges of sitting for less than three and half hours.

“They will not sit on time and before 3:30pm; they would rise. Such behavior from judges must stop” he said.

Mr. Osinbajo commended Lagos State for the progress made by its judicial system, saying the summit represents an indication of commitment towards building a world class judiciary.