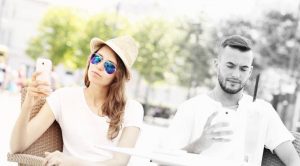 Women are sometimes drawn to assh*les because they can be exciting and keep us on our toes. But not all realize they’re dating a total jerk until all the signs are laid out right in front of them. Some even stay in bad relationships because they’re afraid of not having someone, but being alone is far better than dating a person who doesn’t value you. If you’re nodding to these 11 red flags, it’s time to let him go.

1. He flakes on you regularly.

He doesn’t respect the plans you’ve made and usually has an excuse for not being able to go. He doesn’t even have the common courtesy to reschedule when it’s most convenient for you. Instead, he lets you know last minute (if at all) that he can’t make it and brushes it off like no big deal.

2. He doesn’t respond to your texts/calls in a timely manner.

He doesn’t need to reply right away, but if he’s not returning your messages within 24 hours without good reason, he’s just being rude. You know he’s seen it at that point; he’s just choosing to push you to the side. And the truth is, if he’s really into you, he’d want to talk to you right away.

It’s rarely about what you want to do and more about him dictating the plans. He doesn’t take your interests and noninterests into consideration because he doesn’t really care. He automatically assumes the position of the alpha and doesn’t like it if you disagree with his suggestions.

He’s unavailable when you need him most and any of your problems seem bothersome to him. When you’re upset, it’s not even a concern of his, and don’t even try to ask for favors. But when the situation is reversed, he expects you to be there for him.

5. He’s more into your body than personality.

He has no problem showing PDA but would rather make out than have a real conversation. He loves showing you off to his friends but backs off when it comes to getting serious. It seems like he values your looks more than anything else.

6. His jokes are insulting.

His “playing around” is condescending and/or disrespectful. He doesn’t understand the difference between teasing and being a flat-out jerk, but he doesn’t care how he affects others, anyway. If he puts you down in some way, he doesn’t acknowledge where he was wrong and tells you to stop taking it so seriously.

7. You show more effort than he does.

You’re willing to put work into the relationship, but he gets by with the bare minimum. Your attention and thoughtfulness go unnoticed, and he’s rarely appreciative of your gestures. The times he does show any reciprocation is usually when he wants something, not out of politeness.

8. His actions speak louder than his words — but not in a good way.

You can’t really trust what he says because his actions contradict his promises. He’s a lot of talk but doesn’t pull through on anything, even on the simplest of things.

He never says sorry and doesn’t seem to care about anybody else’s feelings but his own. Even if you’re clearly upset by something he’s done or said, he refuses to show you sympathy.

He’s quick to blame others when he’s at fault and always finds an excuse for his behavior. When it comes to taking the heat, he reverts to a child and points his finger at everyone but himself.

11. He doesn’t care about your needs.

He’s rarely interested in your day and doesn’t ask about your feelings. If you want something to be discussed, you’re the one who has to bring it up because he prioritizes himself first.

If this sounds like your guy, don’t waste any more of your time! You deserve somebody who wants to be with you and a man who’s willing to do what it takes to keep you around. Reevaluate your relationship and yourself if this all sounds familiar, and consider kicking him to the curb.
popsugar