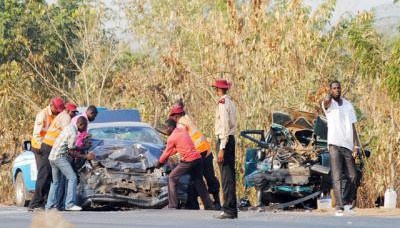 No fewer than two persons died in an accident involving a Volk Wagon Bus (Sharon) on Maiduguri-Birninkudu road in Birninkudu Local Government Area of Jigawa.

Angus Ibezim, the Sector Commander of the Federal Road Safety in the state, told the newsmen in Dutse on Wednesday that the incident, which occurred in Bamaina town, was caused by speeding.

Ibezim said that the bus, which was supposed to carry five passengers, was conveying 10 passengers.

He explained that the remaining eight passengers sustained various degrees of injury.

The sector commander further stated that the corps recovered N222,950,000 belonging to one of the deceased victims.

According to him, the money had since been handed over to the next of kin of the victim.

Mr. Ibezim, therefore, advised motorists to desist from speeding under whatever circumstances.