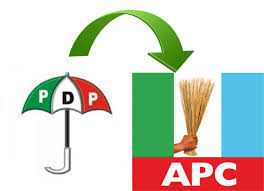 Two out of the five Peoples Democratic Party, PDP, members in Jigawa State House of Assembly, JSHA, have defected to the ruling party, the All Progressive Congress, APC, the News Agency of Nigeria reports.

The Speaker of the House, Idris Isa, announced during plenary on Thursday that the two members had submitted their separate letters to him stating their intention to change their party.

“I received letters from two of our Honourable colleagues stating their change of party (PDP to APC) with effect from today.

Governor Muhammad Badaru of the state was at the house to witness the defection but declined comment even after the speaker requested him to do so.

Speaking to journalists, Mr. Fagam said that he left his party due to its leadership crisis.

“I left the PDP for APC, and I did so because my former party lacked one leadership.

“Even the PDP’s national headquarters had been under lock and key for the past one year.

“I also moved to APC because of prudent management of the state’s resources by the present administration under Gov. Badaru,” he said.

Also, commenting, Mr. Gwiwa told journalists that he joined the APC because the state government had continued with all projects abandoned by immediate past administration in his constituency.

“There were over N4 billion worth of projects abandoned in my constituency and this administration has continued to execute most of these projects.

“We were also being carried along in all activities in House despite the fact that we were PDP members.

“Again, as opposition party members, we were members of sensitive committees of the House. So these are some of the reasons why I joined the APC,” he said.

The two defectors denied allegations that they were given money to abandon their former party.

“Nobody gave us kobo to join APC, I joined the party based on the reasons I told you earlier,” Mr. Fagam said.

Also Mr. Gwiwa said: “Looking at my age and experience, you will believe that there is nothing monetary in my defection to APC”.