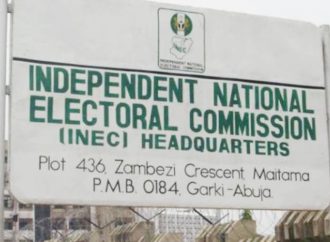 INEC said that the indicted members of staff of the commission would be prosecuted by the police for their alleged role in the re-run.

A statement by Mr. Solomon Soyebi, INEC National Commissioner, said that internal disciplinary measures would also be taken against the members of staff
.
He said that the Commission received the Report of the Joint Police/DSS Special Investigation Panel on the Rivers State Re-Run elections of 10th December 2016.

From the Report, INEC gathered that the Police have concluded their investigations and 25 INEC staff who were indicted will be prosecuted.

“The Commission has resolved to fully co-operate with the Police in this process,’’ he said.

He said that in addition and without prejudice to their prosecution, the indicted INEC staff will also face the Commission’s internal disciplinary process.

“The Commission wishes to reiterate very clearly that it will not shield any of its staff that engages in any conduct that will undermine the integrity of the electoral process.’’

Soyebi said that the Commission also considered the Report of its Administrative Inquiry into re-run and accepted its recommendations that all the indicted staff should face internal disciplinary action for gross misconduct, dereliction of duty and negligence.

“The Commission also accepted the recommendation to commend a number of ad-hoc and permanent staff, as well as security officials who performed exceptionally well under very difficult circumstances of the elections.’’

He commended Prof Ralph Echebiri and Prof. Oji O. Ekemankama both of the Michael Okpara University of Agriculture, Umudike who served in Rivers West and East Senatorial Districts respectively.

He also commended Aguna Isaac and Ademola Oluwatoba who are members of National Youth Service Corps (NYSC) who served as Presiding Officers.

The Commission will offer the two youth corps members automatic employment at the Commission on completion of their service, he promised.

He praised the police for their exemplary conduct and professionalism.

“Arising from the lessons learnt, the Commission will carry out a major overhaul of the entire Rivers State INEC office.’’