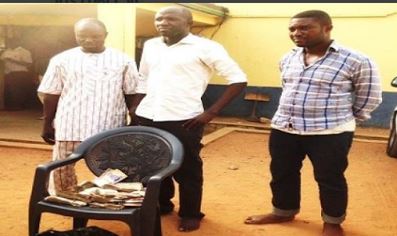 Dr. Philemon Ibrahim Gura and two others, Tivkaa Shimavie and Kenneth Atuwaka, are in the custody of Benue State Police Command over allegation of doubling money for members of the public.

They were apprehended at the premises of St. Theresa Catholic Church, High Level, Makurdi. Benue State Commissioner of Police, Bashir Makama, said the suspects had already collected over N4.5m from a total of 613 people within two days of their operation. .

They’re accused of hiding under an empowerment programme to defraud people. One of their victims, a food vendor and mother-of-3, Nlumun Bagu, said she keyed into the programme because it was announced in the church that some people were around to empower the youths and less privileged.

Bagu said on the first day, she had invested N4, 000, which was doubled for her the following day when she got paid N8, 000, an amount she reinvested before the police swoop on the men.

However, the suspects have claimed that they were carrying out a legitimate business within the confines of law and had not in any way derailed to warrant the alleged police harassment.