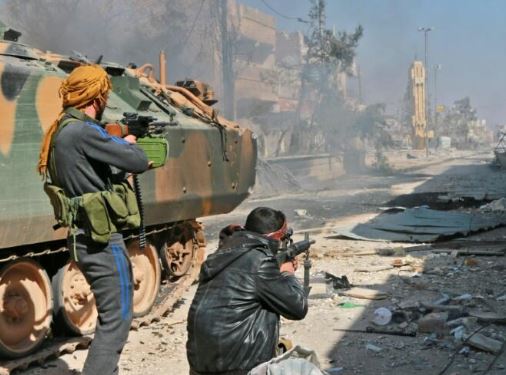 Two suicide car bombings have gone off near Al Bab, killing scores of people, just a day after ISIL fighters were pushed out of the northern Syrian town.
Friday’s first bombing killed 53 people in the village of Sousyan, 10km northwest of Al Bab, and struck Syrian rebels battling ISIL, or the Islamic State of Iraq and the Levant group, local sources said.
The second explosion took place a few hours later and left eight dead, according to the Aleppo Media Center and Thiqa News agency, media platforms operated by activists.
The first suicide bomber targeted a checkpoint manned by Free Syrian Army (FSA) fighters that was crowded with civilians early on Friday.
The Turkish-backed rebels on Thursday drove ISIL from Al Bab , the group’s last significant stronghold in northwest Syria, along with two smaller neighbouring towns, Qabasin and al-Bezah, after weeks of street fighting.
Referring to the first bombing, the medical charity Ambulanciers Sans Frontieres said 45 people, mostly civilians, had been killed and about 70 others were wounded.
“A large number of civilians were gathering around a checkpoint and suddenly a suicide car bomber drove in and detonated,” Al Jazeera’s Andrew Simmons, reporting from Gaziantep on the Syria-Turkey border, said.
“There could be Free Syrian Army members counted in the casualty figures as well. This is really a warning shot from ISIL it would appear.”
The car bomb hit outside a security office where civilians