Home Lifestyle 6 Surprising Foods You Should Never Eat Raw for Your Own Good
Facebook
Twitter
WhatsApp
If you are the type of person that takes your health very serious, then read this interesting piece on which food you shouldn’t take raw. 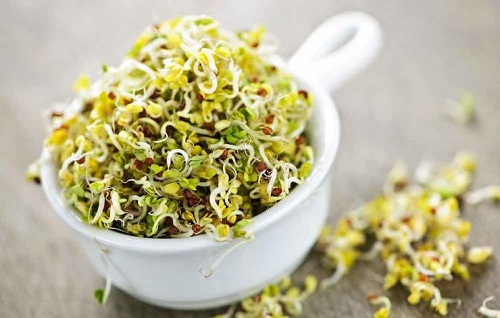 In this educative article, Prevention provides important details why you should not eat some certain types of raw.
When raw, certain foods contain natural toxins or hard-to-digest sugars that can cause gastrointestinal distress and other unpleasant symptoms—no thanks! Others frequently host harmful bacteria when uncooked or unpasteurized. Here, experts reveal 6 foods you probably didn’t know you should avoid eating raw.
1. Potatoes
Nobody likes getting a chunk of raw potato in her breakfast casserole or potpie, but turns out it’s not great for you either. “The uncooked starch in potatoes can result in digestive problems, gas, and bloating,” says Ashvini Mashru, MA, RD, LDN, owner of Wellness Nutrition Concepts in Malvern, PA. “For the most benefit and least risk from your potatoes, bake, steam, sauté, or otherwise cook them.” And stay away from green potatoes, Mashru adds. They contain a high concentration of the poisonous toxin solanine, which can cause headaches and nausea, even in small doses.
2. Sprouts
As tasty as radish and alfalfa sprouts are atop a salad, use them with caution. Uncooked, they’re a hot spot for harmful bacteria, such as salmonella, E. coli, and listeria, warns Lisa Cohn, registered dietitian consultant for miVIP Surgery Centers. “Sprouts should be purchased fresh—farm-to-market is best—and I recommend that young children, pregnant women, the elderly, and those who are immune compromised avoid them altogether.” Wash them thoroughly, and when in doubt, ask your RDN for advice.
3. Red kidney beans
These nutrient-dense legumes make a healthy, low-cost addition to your diet—just make sure to cook them first. “Eating raw red kidney beans can cause extreme nausea, severe vomiting, and diarrhea from a naturally occurring lectin, phytohaemagglutinin,” says Jennifer Christman, RDN, LDN, corporate dietitian at Medifast. This lectin is found in other plants, too, but it’s highly concentrated in raw kidney beans, according to the U.S. Food and Drug Administration. To destroy the toxin, “soak beans for 5 hours, drain the water, then boil the soaked beans in fresh water for at least 30 minutes,” says Christman. Canned kidney beans are cooked and safe to eat.
4. Honey
Raw honey is easy to find at supermarkets these days, as more and more people seek natural sweeteners, but don’t offer it to young children, Cohn cautions. When raw honey is unpasteurized, it may contain grayanotoxin, a naturally occurring neurotoxin found in rhododendron nectar. “Although usually not lethal to humans, symptoms of grayanotoxin poisoning can include dizziness, hypotension, and vagal block,” says Cohn.
5. Yucca
The starchy roots of this plant can be mashed, fried, or boiled like potatoes, and they pack plenty of macronutrients. But raw yucca contains cyanide, mostly in the leaves. “This prevents other animals from eating them; however, some of the cyanide does make it to the root, the edible part,” says Scott Michael Schreiber, a chiropractic physician in Newark, DE. “They must be dried, soaked in water, rinsed, and cooked as soon as possible following harvest.”
6. Milk
“Raw milk has become a trend followed by those who are swayed by the claims that it will prevent certain diseases and illnesses,” says Christman. “The issue with this is that raw milk is not pasteurized.” During pasteurization, milk is heated to at least 161°F for no less than 15 seconds before rapid cooling; this process kills disease-causing bacteria like salmonella, E. coli, and listeria. According to the CDC, illnesses from drinking raw milk (or foods made from it) are on the rise, and children are most likely to get sick. Christman notes, “Pasteurizing milk does not reduce milk’s nutritional value or indicate you can leave milk out of the refrigerator for an extended period of time.”
Eating raw cruciferous vegetables, such as cauliflower, kale, broccoli, Brussels sprouts, and cabbage. “Certain people cannot eat them because they contain sugars that are superhard to digest,” says Mashru. “The reason we cook cruciferous vegetables is because the process makes those sugars much more digestible.”