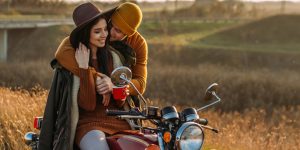 It doesn’t take a grand gesture or costly display of affection to win a girl over. Often, it just takes a little sincerity and display of genuine romantic interest. Despite popular opinion, chivalry is not dead — here are 9 everyday gestures of men that prove it:

1. Opening doors. A guy who takes the time to come around and open the car door for you is a keeper, not to mention a commodity this winter. With certain states getting up to five inches of snow an hour, do you want to be left standing outside in a blizzard while your date gets nice and toasty in the driver’s seat? Recognize and appreciate a guy who puts your comfort and well-being first, even if it’s just for a few extra seconds.

2. Saving the last bite of food. They say the way to a man’s heart is through his stomach. So, when he saves the last bite for you, it’s basically him saying he likes you more than whatever meal is in front of him. Which, for the record, is a lot.

3. Spending time with your family. A guy who shows an interest in your baby photos, coaches your little brother on how to throw a football and compliments your mother’s cooking is a guy who’s in it for the long haul. These are small gestures, but they speak volumes about his intentions.

4. Suffering through a girly movie. When a man volunteers to endure a girly show or movie because he knows you’ll enjoy it, he earns major bonus points. (Even more if he does so without complaining or expecting something in return.)

5. Sending flowers I’m not talking about the $100 bouquet you get on Valentine’s Day. I’m talking about the grocery store assortment he picked up on a random Tuesday while thinking of you. There’s just something about unexpected flowers that makes a girl smile.

6. Walking on the outside of the sidewalk. The first time someone does this, you will probably be confused. But then you’ll start to question how come other men in your life have never been concerned about positioning themselves in such a way that you’d be protected should curbside tragedy strike. It’s not a must, but it’s certainly nice to have.

7. Kissing your forehead. Sure, if you’re hoping to date someone and he does this, it can be a dreaded sign of sibling-like affection. But, if you’re in a long-term relationship and your guy does this, it’s a small gesture that can make you feel adored.

8. Filling up your gas tank Much like walking on the outside of a sidewalk, this gesture will probably surprise you the first time it’s performed. It’s indicative of a man who was raised right and is generally courteous, which is always a welcome surprise.

9. Putting your jacket on Women are fully capable of putting their own jackets on, but it’s not a question of ability. It’s gentlemanly and kind for someone to hold out your jacket for you or offer you theirs when it’s cold.

These are little ways men show they care, the same way women have instincts to nurture and protect loved ones. Chivalry is not dead; men can be everyday knights in shining armor. You just have to learn to spot the subtle, more meaningful gestures.
elitedaily.com