Former Head of States of Nigeria, Mr Atiku Abubakar said to the press  after a closed door meeting he had  with also former Head of State, General Ibrahim Babangida (rtd), the meeting lasted for about two hours in Minna, the Niger State capital.

Atiku said, “If I have to advise (the) government, I will advise them in confidentially because I was in government before. My advice will not be on the pages of newspapers”.

The former vice president, however, noted on the state of the nation that was not the duty of an individual to restructure Nigeria, adding that “It is up to Nigerians to decide on the restructuring of Nigeria”.

He explained to the press that his visit to the former head of states was strictly to pay him a visit on his return from his medical vacation abroad.

“I came to visit General Babangida and to wish him well since he returned from medical vacation abroad,” he said.

Mr Abubakar, who arrived at the Minna Airport in his private aircraft, were he was received by the Niger State Governor, Abubakar Bello. 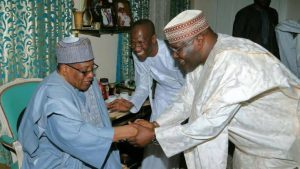 He then proceeded to the Uphill residence of the former military leader where the meeting took place.