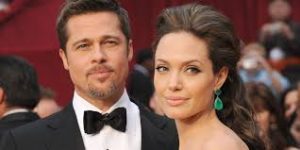 One of the most heart-breaking celebrity new last year was the shocking ending of marriage between Angelina Jolie and Brad Pitt. The 41 year-old-actress, in a recent interview addressed the difficult time after her divorce from Brad Pitt, in public for the first time. “I don’t want to say very much about that, except to say it was a very difficult time. Many, many people find themselves in this situation. My whole family, we have all been through a difficult time.,” Jolie shared.

Brad Pitt refuses to pay Angelina Jolie $100,000 in child support
She also revealed, the couple and their six children are still a family and their children are her priority. “We are a family and we will always be a family, and we will get through this time and hopefully be a stronger family for it. My focus is my children, our children, and my focus is finding this way through,” she added.
The ‘Kung Fu Panda 3’ star, who is busy in promoting her upcoming directorial, ‘First They Killed My Father’, is taking new tasks everyday to move on.
“Right now, I’m going through a moment when just everybody’s in my room. Two hamsters, two dogs and two children at the moment. It’s wonderful. But, usually, I just wake up trying to figure out who’s going to get [the] dog out, who’s going to start the pancakes and did anybody brush their teeth.”
Brad Pitt, made his first public appearance about two months after their divorce, as he attended a screening of now Oscar-nominated movie ‘Moonlight’, which he co-produced.
timesofindia