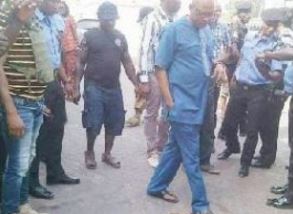 The Imo State Police Command has disclosed that three policemen sustained various degrees of injury while an armed robber was gunned down when a four-man robbery gang attacked Zenith Bank branch on February 22 afternnon.
According to Police Public Relations Officer DSP Andrew Enwerem, the robbers approached the bank in an ash colour Toyota Camry car and immediately commenced shooting but were confronted with stiff resistance from police personnel on guard at the bank.
The Commissioner of Police CP Taiwo Lakanu who received the report had apparently personally mobilized and led teams of police personnel to the scene in a frontal confrontation.
One AK 47 rifle with 100 rounds of ammunition and three magazines were recovered from the hoodlums.
DSP Enwerem stated that “more of the robbers would have been fatally injured if not but the crowd who were scampering for safety which restrained the police from shooting innocent people.”
Furthermore, the officer stated that in the wake of false accounts reportedly being circulated, the media is urged to refrain from speculative publications which is capable of misleading and misinforming the public while advising them to take steps to verify information before going to the press.