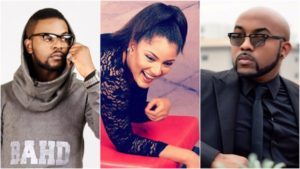 RnB Singer, Banky W has replied to Former Big Brother Naija housemate, Gifty’s apology after she claimed in the house that she had no idea who Falz & Banky W were.

Recall she took to her Instagram page yesterday to pen a note explaining why she said she dosn’t know Falz or Banky W.. then she used that opportunity to apologize sincerely to Nigerians and the artistes. She wrote:

“Good evening everyone…first of all i was misunderstood when I said I don’t know Banky, actually what I meant was, “I’ve never met him in person”..Banky is an amazing singer no doubt. And right now i want to use this platform to apologize for all the wrong words I said about him. It’s just a game,we say/do things for specific reasons + i was emotional unstable cos i was up for possible eviction. So to all banky fans and everyone plz forgive me, Banky I love ur music and you are a talented cute guy! #blessed

And concerning FALZ,i know the song called “soft work” but believe me i had no idea it was FALZ that sang it and also i haven’t met him before..that was why i had to ask “who is he”..#humblefalz
To everyone out there,i just want to refresh your mindset again that the BIG BROTHER SHOW is always a game that has just one winner and whatever actions u have seen in the house is for a reason so please i beg you all don’t judge by what you have seen or heard…..God richly bless you all and I LOVE YOU… abeg make una no vex for ma head na, na game rule me just dey follow ooo #NEVERGIVEUP #ITSJUSTGOD”

Banky W of course saw her note, and he left a reply on the post. See Below: