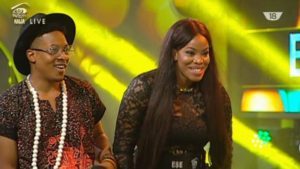 So, It’s Sunday.. and It’s time for the Live Eviction show.. Recall we brought you report last week that Ese and Jon are going home today, Sunday and today we saw them leave the Big Brother House.

Big Brother added a twist to the game when Ebuka called out 4 housemates, Bisola, Jon, Ese and Bally and told them to leave the Big Brother House… They where escorted to the Arena… and then the eviction proper took place in the Arena, which saw Ese and Jon leave.

.. and then, the host of the show, Ebuka, revealed that Bisola and Bally who apparently had Immunity will be on Vacation for about 2 days thereby making the housemates left in the house to feel Big Brother Evicted the four of them.

Live Nominations won’t hold tomorrow, as Biggie added another twist… He made all the housemates, (except Bisola and Bally) play a game of chance which saw all of them pick envelopes that put them up for possible eviction this week.

So, all housemates in the house: Uriel, TTT, Bassey, Efe, Marvis, Kemen, TBoss, Debbie-Rise are all up for possible eviction next week Sunday.

Though, a Game for the Head-of-house will hold tomorrow, Monday.. and Whoever wins, will automatically be off from Possible Eviction.