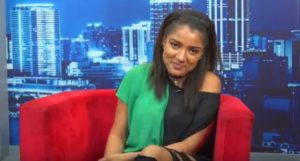 Gifty is still making her media rounds… Amongst which she stopped over at Pulse.ng Office in Lekki where she had an Interview that was Streamed Live on Facebook.

Gifty spoke about what her Game plan was when she was coming into the house.. She revealed her game plan was to “Make the guys fall in love with her” and the ladies “Like her innocent self”.

When she was asked about the Banky W Saga, if it was part of her strategy Gifty said:

Partly yes, partly no.. I think I was misunderstood.. What I meant was I don’t know Banky one-on-one.. personally.. For me to say it out loud, asking TBoss, I think that was part of my Game plan… and I actually apologized, and I’m so happy that Banky replied me and said he understood it was part of the game.

Then she was asked about TTT and Bisola: TTT is a married, and he’s having an affair with Bisola, so what do you think about that?