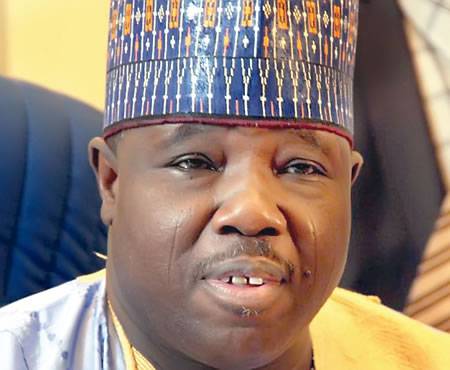 The Borno State chapter of the Peoples Democratic Party, PDP, led by Shettima Shehu on Saturday held a solitary meeting in support of the Ali Modu-Sheriff faction of the party.

The meeting attended by wards and local government Chairmen of the party declared its total support to Mr. Sheriff.

Addressing journalists shortly after the event, Mr. Shehu said, “Today we all gathered to celebrate and rejoice with our hero Sheriff whose emergence as the authentic leader of the party has been affirmed by the Federal Court of Appeal.

“The recent developments in the party resulting in court cases were part of politicking, but as a one big family we can still understand ourselves and of course strive hard to move to the promised land, ” he said.

Mr. Shehu said Mr. Sheriff ‘s court victory was a victory for all; urging all party supporters to team up with the group.

He expressed optimism that with the leadership of Mr. Sheriff, the PDP was almost certain of gaining its lost ground by winning back the presidential election in 2019.

But a faction of the party, called the Borno PDP Grassroots Stakeholders, expressed opposition to the leadership of Sheriff as the National Chairman.

The group, in a communiqué signed by its chairman, Usman Ibrahim, declared its total support for the Ahmed Makarfi led faction of the party.

“We the grassroots stakeholders of Borno PDP unanimously agreed to the leadership of Sen. Ahmed Makarfi caretaker committee of our great party.

“We also concur with the decision taken by the Makarfi group and any other decision that will be taken.

“We want to call on our grassroots stakeholders who were unable to attend this meeting to stay calm and be law abiding as our attitude being pioneer members of this great party,” Mr. Ibrahim said.