Deolu
Lack of clarity about President Donald Trump’s “extreme vetting” policies has continued to roil travellers, airlines and foreign governments, as United States’ (U.S.) immigration officials made decisions on the fly about how to apply the directives.Some days after Trump laid out an executive order temporarily banning individuals from seven Muslim-majority nations from travelling to the United States, lawyers were still struggling to reach clients being questioned at U.S. ports of entry.

Meanwhile, customs agents were handling entries for green-card holders on a case-by-case basis, and European governments were giving conflicting instructions to people with dual nationalities — both topics on which the Trump administration had sent decidedly mixed signals. 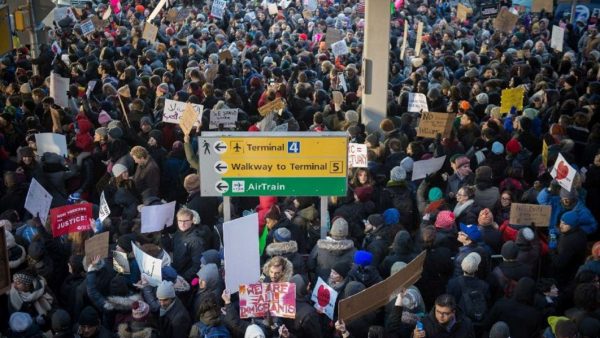 In reaction, the International Air Transport Association (IATA) has sought early clarity from the U.S. administration on the current situation.IATA, which is the clearing house for 265 airlines around the world, expressed concerns that the order was issued without prior coordination or warning, “causing confusion among both airlines and travellers.”Security officials at the Department of Homeland Security complained that the roll out of Trump’s order “was as chaotic on the inside as it looked on the outside,” adding that “nobody knew anything” before the White House announced the policy last Friday night.

The official blamed much of the confusion on the order’s vague and imprecise language. “They just don’t seem to even know how to write a government policy,” said the official, adding that “even 12 hours worth of legal review” would have cleared up many of the problems.

Even members of Congress are running into brick walls trying to get answers, Sen. Marco Rubio said Monday night.“We’re hearing from cruise lines and airports in our state, the tourism sector, concerned with the visa waiver interview process,” Rubio said: “And there aren’t a lot of answers as of today. In fact, my staff was told the State Department as of today was ordered not to talk to Congress about this issue.”

IATA said while it recognises that states have the right and duty to protect their citizens by enforcing their borders, where it has implications for air travel “we work with our member airlines to help them comply with these requirements efficiently and effectively.”

“Global systems and procedures exist to support this activity. IATA’s Timatic online solution, for example, is a global database for travel document requirements. It is updated constantly and used by airlines and travel agents around the world.

“These systems can only support the efficient implementation of any government’s directives by the global air transport industry with advance coordination as well as with detailed and consistent operational information.”

“The EO was issued without prior coordination or warning, causing confusion among both airlines and travelers. It also placed additional burdens on airlines to comply with unclear requirements, to bear implementation costs and to face potential penalties for non-compliance,” IATA said in a statement.

While it urged the U.S. government to clear the air, IATA also appealed to all governments to provide sufficient advance coordination of changes in entry requirements so that travelers can clearly understand them and airlines can efficiently implement them.