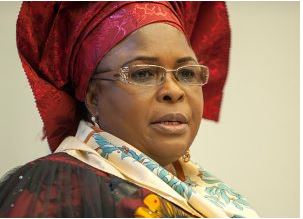 A Federal High Court sitting in Port Harcourt, has adjourned till April 24, 2017, hearing on suit for the enforcement of human rights brought against the Economic and Financial Crimes Commission (EFCC) by former First Lady, Dame Patience Jonathan.

Mrs. Jonathan had approached the court seeking a declaration that the freezing of her bank accounts and those of her relatives by the EFCC, is a violation of her fundamental human rights to own property and to fair hearing.

The former First Lady also alleged that the breaking into and ransacking of her family property by officers of the Commission while executing a search warrant was a violation of her fundamental human rights to private and family life.

The applicant is also seeking a “declaration that the incessant harassments of the former first lady on the ground of her political views and for being the wife of the former presidents who belongs to the opposition party in Nigeria is a violation of her fundamental human rights to freedom.

She is also seeking the sum of N2 billion as damages for the alleged violation of her fundamental human rights by the Commission.

It stated that the honourable court lacks the requisite jurisdiction to pry into and determine this suit as presently constituted as the action did not disclose any good, valid and or reasonable cause of action against the respondent/applicant. It stated that the applicant was never invited nor investigated in any way whatsoever by the Port Harcourt office of the EFCC.

During yesterday’s sitting, counsel for Mrs. Jonathan, Granville Abibo, SAN, told the Court, presided over by Justice Saliu Saidu, that he has just been served with the counter affidavit by the EFCC and so needed time to respond.

Counsel for the commission, Kayode Oni said he was served with the processes by the applicant’s counsel last week and also filed his response last week.