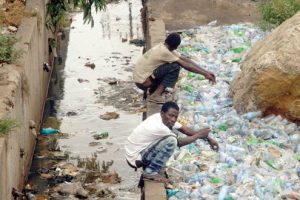 Ekiti State has the highest number of residents, among Nigerian states, who defecate openly, two agencies have said.
The United Nations Children’s Fund and the European Union state that two in three Ekiti residents engage in open defecation.
This is contained in a report jointly presented by the organizations at a two-day media networking and alliance building workshop on Water Sanitation and Hygiene held at Ijero Ekiti.
The programme, which ended on Saturday, was sponsored by both foreign organisations; and also featured Open Defecation Free, ODF, campaign.
The report stated that of the state’s 2.7million population, 1.8million engage in the unhygienic practice. It said the Ekiti figure represents 60.8% of Nigerians who defecate openly.
The organisations said over 2.5 billion people lacked access to improved sanitation globally, out of which one billion were engaging in open defecation.
The UNICEF/EU delegation, led by Mohsena Islam, a Water Sanitation and Hygiene specialist from UNICEF, had earlier embarked on a field trip with Ekiti Media WASH group to Asasa and Temidire Olojofi farm settlements in Aramoko Ekiti, to assess compliance with the campaign against open defecation.
Mr. Mohsena disclosed that several achievements had been recorded through UNICEF/EU WASH programme in Ekiti, using Gbonyin and Ekiti West as pilot councils in advocacy for open defecation Free and WASH.

“In Ekiti , an estimated number of 180,000 people are gaining access to good source of water through provision of hand pump boreholes,” he said.
” In the same way, 29,582 people in Ekiti have gained access to safe water through rehabilitation of 65 hand pumps in Gbonyin. 965 pupils from four schools now have access to child and gender friendly water supply.
“We have also brought improvement to 250 towns and communities in ODF by providing ten toilets per public. We have also provided technical supports in 313 communities, for them to know various ways to build and take ownership of low cost latrines and how to repair them in case of damage.
“Stakeholders would continue to step up sensitization and advocacy in rural areas on the need to key into the total eradication of open defecation , to forestall breakout of diseases.”
The Coordinator of Community Led Total Sanitation, CLTS, in Gbonyin, Kayode Eleso, said many residents were arrested and prosecuted for engaging in open defecation, particularly in Ado Ekiti metropolis; while efforts, were also on to compel every household to have toilets.
He regretted that low manpower in the sector was responsible for the noticeable inefficiency of his officers , saying records show that no staff had been recruited since Ekiti was created on October 1, 1996.
Lanre Ayeni, a CLTS facilitator and staff of Rural Water Sanitation Agency in Ekiti ,said in her presentation that 748 million of the global population, lack access to hygienic water supply .
She said it was so regrettable that 1.8 billion people still use contaminated sources of water, which she said has caused a lot of damage to their health and body systems.
“Advocacy for open defecation free in Ekiti and good water sanitation is yielding results. Enforcement in the past by CLTS coordinators had failed .
“What we now use is persuasion and people are gradually changing their perception about this concept.”
source: premiumtimes