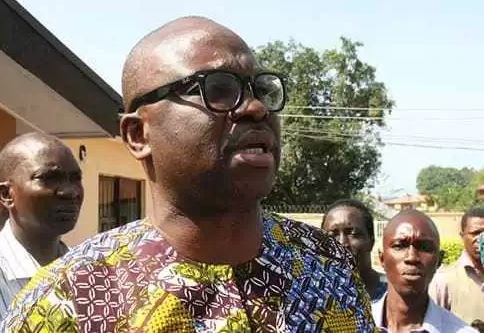 The Governor of Ekiti State and Chairman of the Peoples Democratic Party ( PDP) Governors Forum, Peter Ayodele Fayose yesterday stormed the Federal Ministry of Finance complex over non payment of the state’s allocation for the month of January, and N1.1billion budget support fund.

Fayose who was at the ministry to demand seek explanation from the Minister of Finance, Mrs. Kemi Adeosun, noted that other states of the federation had received the allocation but Ekiti State.

The Governor also stated that the oversight was to suspicious, as he said the situation has repeated itself the second time.

“What we are talking about is a part of the monthly allocation for the month of January and the budget support which is about N1.1b that have not been paid,” he said.
Fayose who arrived at the ministry around 3:30pm on Wednesday had a short meeting with officials of the ministry, as the Minister of Finance, Mrs. Kemi Adeosun was at the Federal Executive Council meeting.

While briefing journalists, shortly after the meeting, the Governor said Mrs. Adeosun had spoken to him over the matter, and assured that the delay wasn’t politically motivated.
“By the time I got here the Minister has already gone for the Federal Executive Council (FEC) meeting but I met the Special Adviser, who assured me that the matter will be resolved when the Minister is back. I believe I should do a follow up to meet with the Minister of Finance for an update but she actually called me on Tuesday that she just got back but going to look into it today and have it resolved as soon as possible,” Fayose said.

He lamented that civil servants in the state had not been paid due to the avoidable delay.
“You will however appreciate that Ekiti civil servants are restive, having spent Christmas and there is no money in January obviously there will be challenges. I believe this should be done immediately and I want to believe also that it was a mix up and not political but if it is political, they will have a lot of questions to answer why it should be so,” he added.

Fayose stated further that the federal government will do a great disservice to the government and people of Ekiti State, if it delays budgetary allocation to the state out of hatred for him.

“If they want to fight Fayose, they should fight Fayose but not the civil servants of Ekiti but I appreciate the her prompt and promise to resolve the matter. ‎It is only Ekiti that is involved and this is the second time, that explains why I was suspicious and have to act fast,” he stated.

The Governor expressed optimism that the issue would be resolved soon.

“The Minister has given me her words and that is it, at her level as a minister, that is good enough. If the promise of the Minister to resolve this issue as quickly as possible fails, I will have to bring it back to the public domain, we are all in the court of the public opinion where the public is able to judge whether justice is served at all times. Governance is beyond all of us but I want to believe that they will do it,” Fayose concluded.