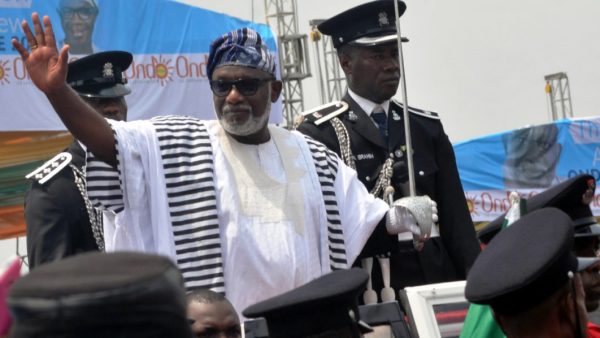 Governor Oluwarotimi Akeredolu (SAN) has urged the people of Ondo State to be patient with his government. He said he would not receive any salary until the workers in the state are paid all the salary arrears inherited from his predecessor.

He, therefore, urged them, especially the health workers, to suspend their strike and be committed to duty so as to move the state forward. The governor, who said this yesterday at the Governor’s Office in Alagbaka, Akure, when he resumed office and met with civil servants, stressed that he was one of them and preferred to be addressed as a governor and not “executive governor.”

“For as long as you have not been paid your salaries for that long, your governor too cannot be paid his salary. A governor should not earn salaries when others are owed salaries,” he said.

He said he would operate an open government by setting up a committee that will include the accountant-general and few others to address the backlog of workers’ salaries. He assured them that he would soon settle down for a round-able dialogue with them.

Besides, he refuted the publications in the national dailies (not The Guardian) that he appealed in a court of higher jurisdiction for the dissolution of local council elections conducted last year across the 18 local councils of the state by his predecessor, Dr. Olusegun Mimiko.

Counsel to the governor, Mr. Charles Titiloye, at the Court of Appeal sitting in Akure yesterday said his client was unaware of any suit on the dissolution of the 18 local government councils in the state.

The governor had purportedly appealed a judgment delivered by Justice Olasehinde Kumuyi of the state High Court in January 2017, restraining him from removing the council bosses from office. But Titiloye told the appellate court that his client, Governor Oluwarotimi Akeredolu was embarrassed by the reports.

He said the governor was neither aware of both the order of the High Court restraining him from dissolving the councils nor the appeal supposedly filed by him.

Akeredolu, who urged people to always say the truth, admitted that no human being is perfect. He enjoined the people to “be critical of your governor, be critical about our government but be constructive in your criticisms. We will run an open government.”

In another development, no fewer than five persons have been reported killed in Ondo town over All Progressives Congress (APC) intra-party crisis.

The Guardian gathered that the gruesome murder of the deceased was a reprisal attack by a rival cult group in the town over the killing of its members last Friday after the swearing-in ceremony of Akeredolu.