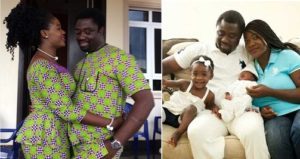 Mercy Johnson and husband, Prince Okojie, have weathered their fair share of storms, especially at the beginning of their marriage, with many labeling the actress ‘home breaker’.

But six years into their marriage and three kids to show for it, the soft-spoken Okojie has said that nothing else can break their home.

‘How We Handle Disputes’ – Mercy Johnson’s Husband, Prince Okojie Reveals Explaining how he and his wife handle disputes between them, he said,

“Prior to our marriage, I’d known my wife for three years; we actually met in 2008. We started living together in 2009 and we got married in 2011. It’s been God all the way, there’s no miracle or anything much, it’s just been God.

“With marriage break-ups and celebrity dramas, I think it depends on what one wants. For me, when I met my wife, I knew she was the one for me. The love, the affection and the tender care are all present, and although we might have some misunderstanding but when we sleep over it, we move on. My wife is my best friend, I hold her in high esteem and as a result of this, we don’t quarrel often. When we do, we learn from it and move to the next level,” he told New Telegraph.

He added that he has never had a situation where he would not speak with his wife for up to a day because of dispute, adding that he was enjoying his marriage to the fullest.

“I have a very big house, my wife has a very big room and so do I, but she has never spent the night in her room for one day. Sometimes when I tease her and say ‘go to your room’, she tells me ‘this is our room not your room’ and so most times we are always together. I have never experienced anything like this, my marriage to her is so sweet and I’m enjoying it to the fullest. Like I said, I won’t give the kudos to man but to God Almighty who has kept us in happiness, in peace and in harmony.”

Prince Okojie also said that he doesn’t watch any of his wife’s movies so he doesn’t have to deal with the emotions of seeing her do things that are required of her on set. ” he said.