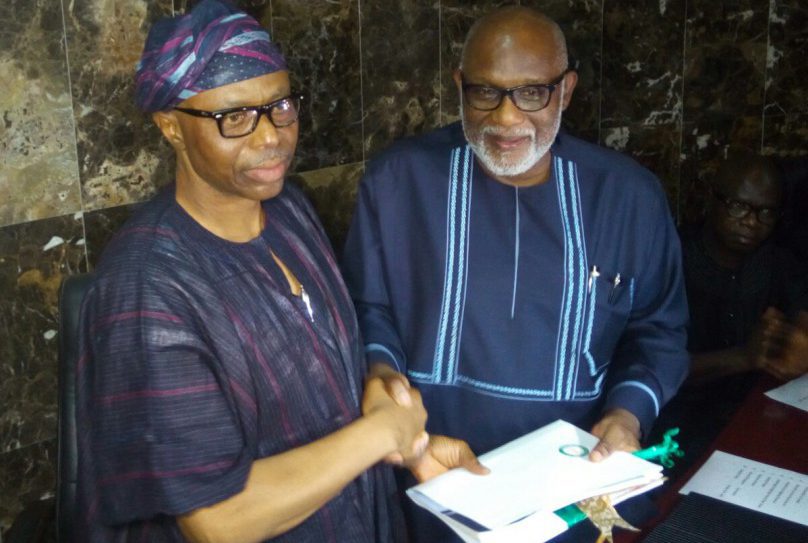 Outgoing Governor of Ondo State Olusegun Mimiko, on Thursday night formally handed over the instruments of power to the Governor-elect, Oluwarotimi Akeredolu, (SAN), as the seventh governor of the State.

Akeredolu of the All Progressives Congress (APC) defeated Eyitayo Jegede of the Peoples Democratic Party (PDP) in the Nov.26 governorship election to become the governor-elect.

He will be officially sworn in on Friday as the fourth civilian governor since Ekiti was carved out of Ondo state in 1996.

Speaking at the handing over ceremony, Mimiko expressed belief that he was leaving the state in safe hands.

He appealed to Akeredolu to ensure that the peace enjoyed by the people of the state in the last eight years is sustained.

“It would have been a miracle to have achieved our modest achievements in office if the state had not been peaceful.

“We enjoyed cooperation of all citizens, diverse interest groups and all stakeholders. That is why there has been an atmosphere of peace in the state these last eight years.

“Therefore, I will enjoin you to sustain the peaceful co-existence in the state for your administration to be successful,” he said.

Mimiko said he would continue to offer his service to the state by rising to the occasion each time his advice and expertise was needed.

Earlier, Akeredolu had lauded the outgoing government for putting in place seamless transition.

The incoming governor, who commended Mimiko for having done his best for the advancement of the state, promised to continue to tap from his wealth of experience.

“We will continue to ask for your advice where it matters. Any service you render in this regard is not for Aketi but for Ondo State.

“We will continue to disturb you and we hope that you will always cooperate with us for the development of our dear state,” he added.