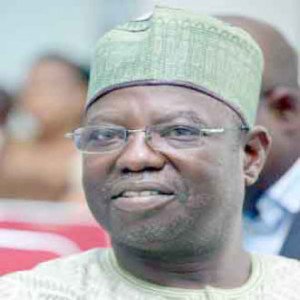 Justice Mojisola Olatoregun of the Federal High Court in Lagos will on February 21 conduct a trial within trial to determine whether or not a statements obtained by the Economic and Financial Crimes Commission (EFCC) from a former acting Director General of Nigeria Maritime Administration and Safety Agency (NIMASA) Haruna Jauro was made voluntarily.

The judge fixed the date after counsel to Jauro, Olalekan Ojo objected to the tendering if the extrajudicial statement made by his client on grounds that it was not made voluntarily.

The EFCC had on April 12, 2016 filed a 19 counts charge of conspiracy, illegal conversion and fraud against Jauro, Dr Dauda Bistrus Bawa and a Limited liability company, Thlumbau Enterprises Limited.

The anti-graft agency had specifically alleged that the former acting boss of NIMASA and his co-accused stole and converted N304.1 million belonging to NIMASA to personal use.

They all pleaded not guilty to the charges and they were granted bail by the court in the sum of N5 million each with two sureties in like sum.

At the resumed hearing of the matter on Monday, the EFCC called its first witness, Orji Chukwuma, an investigating officer with the EFCC, who testified on some exhibit earlier tendered by the commission.

Chukwuma, who was being led in evidence by the counsel to the EFCC, Rotimi Oyedepo told the court that exhibit G represented a request for the transfer of the sum of N176 million to seven beneficiaries, which said document was signed by one Captain Ezekiel Agaba, who is also facing charges of fraud before a brother judge.

The witness also said that investigations revealed that the seven beneficiaries of the sum totalling N176 million were either Executive Directors, Board members, or Directors in NIMASA.

Chukwuma further testified that out of the said sum, the second accused benefited the sum of N20 million through his bank account.

According to the witness, before the commencement of investigations, the first accused had pleaded and returned his own part of the money.

He also identified exhibit H to represent an internal Memo of NIMASA indicating that the funds are to be transferred for immediate intelligence gathering.

Chukwuma also claimed that on July 10, 2014 investigations revealed that the account of Thumbau Enterprises Ltd, a company linked to the first and second accused received a sum of N20 million from the committee on intelligence gathering.

According to the EFCC witness the said sum was never used for the proposed intelligence gathering but rather merged with other proceeds of crime and transferred to one Helen Mbonu.

The witness also told the court that exhibit “I” represents a request for the transfer of the sum of N15 million also to Thumbau Enterprises Ltd.

He said that investigations revealed that about N12 million from the sum was used to pay a part loan from Aso savings and loans plc, while the balance was merged with other crime proceeds to purchase a house for the first accused in Lekki.

Ojo opined that the accused’s statement was obtained by consequences of inducement by the Commission adding that same cannot be tendered and admitted in court.

Consequently, Justice Olatoregun ruled in favour of a trial-within-trial, and adjourned the case to Feb. 21, March 3, 13 and 14, for continuation.

The judge added that counsels must be prepared to proceed on that date.

Jauro assumed leadership of NIMASA, after an erstwhile Director General of the agency, Patrick Apkobolokemi, who is also being prosecuted alongside others over multi billion naira fraud.

The anti-graft agency alleged that the accused converted the sums to their private use, an offence which it said contravened the provisions of section 15(1) of the Money Laundering (Prohibition) (Amendment) Act, 2012

He stated “I have been in the business of one chance since 2015. At a point, I stopped and began pick pocketing, joining buses to Sango, Agege, Oshodi, Apapa and disembarking whenever I have fleeced commuters of their phones and money.

“At a time, I was arrested in Mushin Olosa Police station. My mum, who was very ill and on admission in an hospital at that time was brought to see me in a chattered car in detention.  She pleaded with the officers and secured my bail. She warned me repeatedly never to take other people sweat.

“She told me that if I have been using other peoples’ sweat to foot her hospital bills, I should stop it forthwith. She insisted that if I want to live long, I should stop stealing from people. She added that the consequences would be too severe for me if I go back again. Few weeks after the incidence, she died”.

He added that, “I did it then because I needed N140, 000 to pay my house rent. At this time, I got more than that from a week operation but I didn’t stop then. Now, I went back into it to help raise funds for my siblings so that they won’t follow the same path.

“I am the first child and the breadwinner of the family. Since the death of my mother, I have been taking care of my brothers. That was my promise to my mum before her death”.

Confirming the development, the State’s Police Public Relations Officer, Dolapo Badmos, a Superintendent of Police,  said that the Command will not rest on its oars in nipping in the bud criminal activities in the state.

The suspect has been transferred to the State Criminal Investigation Department (SCID), Yaba, for further investigations.