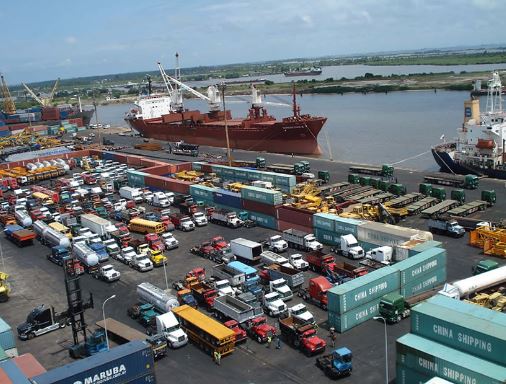 Clearing agents operating at the Roll On Roll Off (RORO) seaport in Tin-Can Island Lagos have raised the alarm that activities were yet to improve at the port despite FG ban on importation of vehicles through land borders.
The clearing agents who spoke under the aegis of National Association of Government Approved Freight Forwarders (NAGAFF) said despite the fact that the ban has been effective vehicles are yet to come to the port.
The association speaking through its National Publicity Secretary, Stanley Ezenga, said reports from freight forwarders on the field revealed that the various ports had not been able to attract the anticipated high influx of vehicle cargoes which the new policy was poised to achieve.
“We don’t think this is a problem as the policy has just started and there is still time to evaluate the whole thing. “We think importers who were used to diverting cargoes to the neighbouring countries’ ports are not responding because they think that government might change its mind so that they can continue to use the borders.
“We are in support of this policy and we believe the ban will achieve its objective in time.
’’He said the fact that vehicle dealers in Cotonou in the Republic of Benin, were already lamenting following the commencement of the policy showed that Nigeria had been losing so much revenue to the neighbouring countries’ ports.
Ezenga said that the country would have reaped so much if the policy had been introduced before now.
The spokesman urged Nigerians to envision the economic benefits of the policy and give the government the necessary support to achieve its objectives. In a related development, the land import ban is currently hitting hard on freight forwarders operating at the Nigeria border of Seme and Idiroko.
Speaking LEADERSHIP, the Chairman Seme Chapter, NAGAFF Chief Ekene Ajunwa confirmed that the restriction of vehicles since the beginning of the year had led to job losses. Ajunwa lamented the policy has made men useless and jobless, due to the government ban on vehicles importation through land border.
He noted that by banning vehicles from the borders, it was clear that people were bound to be jobless.

Ajunwa lamented that since the implementation of the ban of vehicles from land borders, members of the association are jobless because there has been no way to diversify when there is no business within the international frontiers.