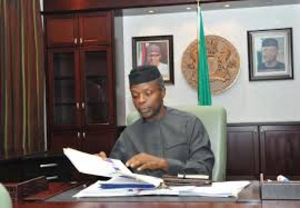 Acting President Yemi Osinbajo has written to the National Assembly, seeking its approval to issue Eurobond debt instrument of $500 million to fund the implementation of the 2016 budget till May 2017.

According to him, the $500 million bond will be issued between February and March 2017, subject to market conditions, in order to meet government’s approved capital expenditure funding plan.

In the letter read by the Speaker of the House of Representatives, Yakubu Dogara at yesterday’s plenary, Osinbajo noted that items 229 and 244 of the 2016 Appropriation Act provided for a deficit of N2,204.742 billion and new borrowings of N1, 818, 675 billion.

“Thus based on the 2016 appropriation and applying the average exchange rate, there is headroom to access further international funds. Following the high oversubscription to the recent USD 1 billion Eurobond issuance, we wish to take advantage of favourable market conditions to issue a Eurobond debt instrument of USD 500 million to fund the implementation of the 2016 budget, which is still ongoing.

“The Rt. Honourable speaker may wish to note that in line with the requirement of securities issuances in the ICM, a specific resolution of the National Assembly, as a firm confirmation of the approval of the legislature for the Federal Government of Nigeria to borrow the USD 500 million through the issuance of a Eurobond debt instrument in the ICM is required”.

Buttressing his point for the domestic borrowing, the acting president continued: “The Rt. Honourable speaker may wish to note that the proceeds of the Eurobond are to be used as funding sources to finance the budget deficit, including capital expenditure projects as specified in the 2016 appropriation act.

“The Debt Management Office and the federal government are appointed transaction parties to the issue and are committed to working assiduously to secure the best terms and conditions for the Federal Republic of Nigeria. Accordingly, the Rt. Honourable speaker is requested to kindly approve by resolution of the National Assembly the issuance of USD 500 million Eurobond in the international capital market for the funding of the budget”.

Speaker Dogara also read President Muhammadu Buhari’s letter notifying the House of the extension of his medical leave in the UK on the advice of his doctors.

In another development, the acting president has withheld assent to four amended laws by the National Assembly, citing various reasons including principle and constitutional, for his action.

LEADERSHIP reports that the acting president had last week assented to seven bills passed into law by the National Assembly.