A man inn the US returned home to discover his pet squirrel had protected his home from would-be burglars while he was away. 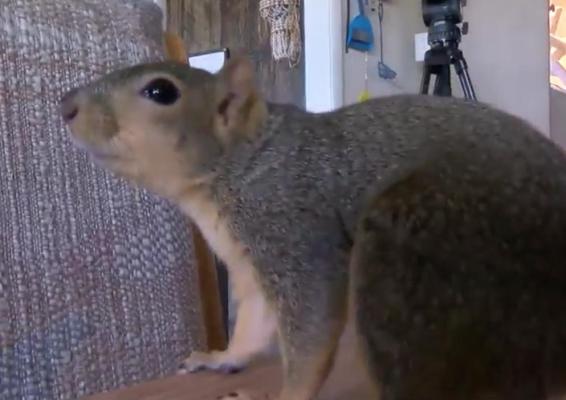 Adam Pearl noticed several signs of break-in before walking into his home on Tuesday, where his pet squirrel Joey had been left alone.

“I came in the front door and I saw snow prints out in the front driveway going to the back of the house, so I thought something was awry because no one usually goes through the yard,” Pearl told KIVI.

He soon walked into his back room and had his suspicions confirmed when he noticed scratches around the locking area of his gun safe.

He called the police, and when Meridian Police Officer Ashley Turner arrived at his home, she was startled by the presence of the friendly pet squirrel.

“During her investigations Joey had run in the bedroom just screwing around like he always does between her legs and kind of startled her,” Pearl said.

Turner managed to track down the burglars within hours and learned that Joey left the suspects with multiple scratches in his attempt to defend Pearl’s belongings.

“She said while she was questioning the individual, he had scratches on his hands, so she asked him, ‘So did you get that from the squirrel’ and he says yeah, damn thing kept attacking me and wouldn’t stop until I left,” Pearl said.

Pearl had his belongings returned and he rewarded Joey for his heroics by feeding him his favorite candy, whoppers.