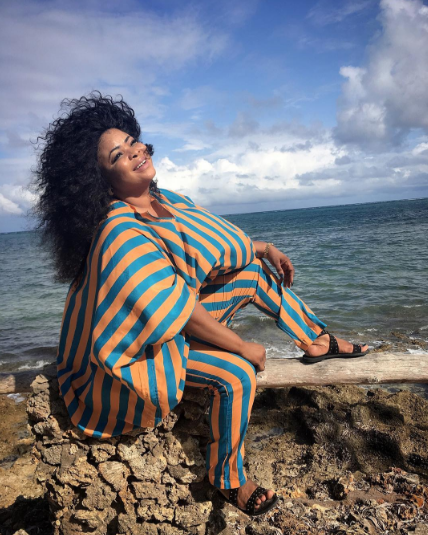 Top Yoruba actress, Dayo Amusa who just released a new song, ‘Blow My Mind’ to the amazement of some of her fans has disclosed her love for music in a chat with Sunday Scoop, she said, “I was driving in the Maryland area of Lagos recently when a fan waved at me from her car. I greeted her in return, then she asked for my phone number, saying she would like to call me afterwards, but I politely told her I couldn’t give her my number. However, she started insulting me because of that. I could have responded, but I felt she wasn’t worth it. Thankfully, the traffic light just came up green at that point and I drove off.”

Professing her undying love for music, the curvy actress said, “Music is my first love, but I got attention, opportunity and a platform in the movie industry first. Most importantly, I see music as a form of communication to express myself and get across to people. It is not all about money for me; after all, since I’ve been releasing songs and videos for years now, I have been doing it with my own money. Though I’m not making money out of my music career yet, I’m confident that I will still recoup all that  I’ve spent. I get inspired by things that happen around me, and I like passing inspirational messages through my songs. I will put a lot of things into consideration before picking one over the other; however, I don’t see them affecting one another in any way.”

Speaking on the response of fans to her latest song, Blow my Mind, she said, “The response has been very positive and encouraging. I have plans to release an album but I have other projects at hand now that are taking my time so it may not be anytime soon.”

On the notion that she just sings but doesn’t get invited to perform at shows, she quipped, “I do perform at some events, especially weddings, though I don’t upload videos of my performances online and that’s why it seems like I don’t sing at events. I really don’t bother myself about the way people think about me because I’ve come to realise that people are from different backgrounds, and we think differently. I can’t crucify anybody for thinking about me in a certain way; so long as I have a clear conscience, I’m okay. I know I do the right things at the right times.”