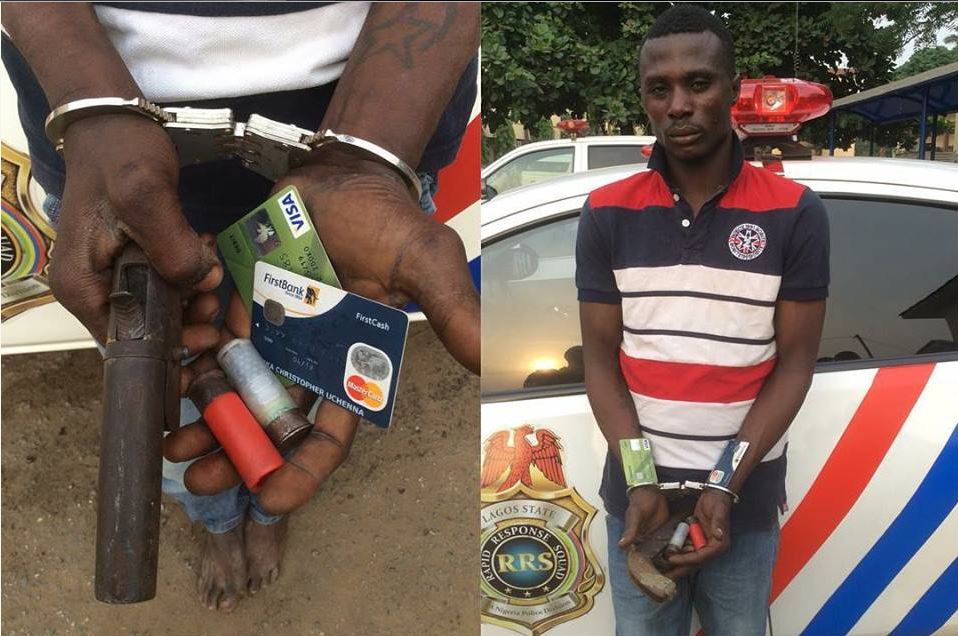 A gun – wielding robber, Gbenga Babatunde, 35, arrested by operatives of Rapid Response Squad (RRS) of the Lagos State Police, Command, has confessed to have robbed about 35 ATM users in Alaba Rago Market, Ojo, Lagos before his arrest.

The suspected robber, who was arrested after a failed bid to rob a lady who withdrew an unspecified amount of money around 5:48 a.m. at an ATM point in Alaba Rago Market, was chased by the operatives, patrolling the area.

It was gathered that the suspect, was not operating alone. He had an accomplice, whose name was given as Samson Baba Ramadan, 28, but he however managed to escape after the botched operation.

During interrogation, the suspected said: “I have been in the crime since I met my colleague, Samson Baba Ramadan. I met him at Field Joint, Alaba, 2 years ago and since then we have been working together.

As soon as the withdrawer collects the money, we will accost him or her and collect the money and escape. I don’t go home. I sleep in Osankwa Hotel, Alaba Rago. It is only whenever I don’t have money that I go home. I have no wife or child.”

Also recovered from the suspect were: a First Bank mastercard belonging to Iweka Christopher Uchenna and a Diamond Bank debit card owned by Nkechi Esther Idoko.