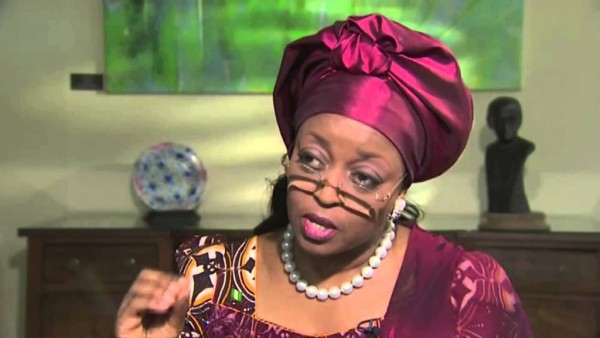 A photo of the exquisite 15-storey building worth $37.5m allegedly belonging to the former Minister of Petroleum Resources, Mrs. Diezani Alison-Madueke recently uncovered by the Economic and Financial Crimes Commission has been revealed.
According to The Nation, the mansion is located on the highbrow Banana Island in Lagos is the latest on the list of choice  properties said to have been acquired by the ex-minister with alleged stolen public funds. It is an 18 flat edifice.
A reliable EFCC  source said yesterday that the ownership of the building was discovered this week in the course of  the investigation of the former minister.
The source said: “The property Building 3, Block B, is a 15 storey edifice comprising 18 flats and 6 penthouses, Bella Vista at Plot 1, Zone N, Federal Government Layout, Banana Island Layout, Foreshore Estate, Off Onikoyi Road, Ikoyi, Lagos.

“The property was acquired by the former minister between 2011 and 2012 at a total cost of $37,500,000USD from the developers, YF Construction Development and Real Estate.
“It was acquired in the name of a Shell company, Rusimpex Limited under the control of a  certain Mr. Afamefuna Nwokedi in Lagos.
“The investigation continues.”
The  EFCC source said the agency might  seize the property.
His words: “We will do this after the completion of investigation and obtaining of all title documents.”
Sections 28 and 34 of the EFCC (Establishment Act) 2004 and Section 13(1) of the Federal High Court Act, 2004 empower the anti-graft agency to invoke Interim Assets Forfeiture Clause.
Section 28 of the EFCC Act reads: ‘Where a person is arrested for an offence under this Act, the Commission shall immediately trace and attach all the assets and properties of the person acquired as a result of such economic or financial crime and shall thereafter cause to be obtained an interim attachment order from the Court.’
Section 13 of the Federal High Court Act reads in part : “The Court may grant an injunction or appoint a receiver by an interlocutory order in all cases in which it appears to the Court to be just or convenient so to do.
(2) Any such order may be made either unconditionally or on such terms and conditions as the Court thinks just.” 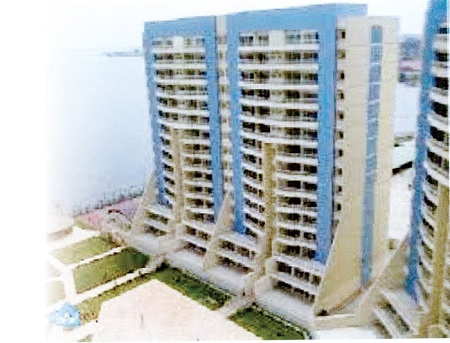 Photo of the 15-storey building allegedly belonging to Diezani (Photo: The Nation)
Properties which EFCC records show as belonging to Mrs.Alison-Madueke are:
A block of 6 unit service apartments at Awolowo Road, Ikoyi
*Six unit terrace flats in Yaba, Lagos
Twin four-bedroom duplexes in Lekki Phase I
Two duplexes in Banana Island
A duplex in Asokoro. District, Abuja
A mini-estate in Mabushi, Abuja
A set of 12 terrace duplexes at Omaremi Street  in Port Harcourt
Large expanse of land at Oniru, Victoria Island in Lagos
* A multi-billion Naira estate in Yenagoa
* Two apartments in Dubai marked as J5 Emirates Hills (30million Dirham) and  E146 Emirates Hills valued at 44million Dirham
* A hotel in Port Harcourt under investigation.
The former minister in a January 21 2017 lengthy statement in London denied being a thief.
She accused the EFCC of  taking advantage of her silence all this while to put her on media trial and cited the   $153million which she was accused of withdrawing from the accounts of the Nigerian National Petroleum Corporation( NNPC) while in office.
She said that as the petroleum minister, the operation and management of NNPC finances were “outside my purview as outlined in both the Petroleum Act and the NNPC Act.”
She added:”The only involvement I had in NNPC finances was in terms of statutory matters, where the Petroleum Act prescribed that as Minister, there were certain duties or actions which I had to perform or take in relation to NNPC.”
On the alleged $700million found in her house and some mansions traced to her, Diezani accused EFCC of witch-hunt,saying: “On the 13th of June 2016, the EFCC once again took their well-trodden path to the media. This time claiming  that they had ‘discovered’ a mansion in Asokoro, Abuja, worth $18million  (approx. N9billion) which they purported to belong to me. The EFCC went to the extent of bringing in Aljazeera, an international TV station, to air a damaging documentary against me in this regard, showing a particular residential building in Asokoro, Abuja, which they told Aljazeera belonged to me
“The EFCC Chairman Ibrahim Magu, personally took the Aljazeera reporter to the building, alleging that it belonged to me. It has since become apparent that the house belongs to a company owned by Mr Kola Aluko.
“If this is not a witch-hunt or a personal vendetta against me, how is it that one of our country’s premier investigative agencies were unable to avail themselves of facts that are freely available in the public domain.
“Since the EFCC claims that the alleged $18million Asokoro property belongs to me, then they should kindly produce the ‘Authentic’ Certificate of Occupancy and Land Registry information and any other relevant information, as proof of my ownership of the property.
“On the 9th November 2016, the EFCC visited our family home in Yenagoa (Bayelsa State) as pre-agreed and they were escorted around the premises. I was therefore completely shocked to once again see my name sensationally splashed across the front pages of newspapers and widely circulated on the internet, with blaring headlines such as “EFCC UNCOVERS DIEZANI’S MULTI-BILLION NAIRA ESTATE” – Nation Newspaper, January 8, 2017 (Annex- 4A). There was absolutely nothing ‘Hidden’ or ‘Concealed’ about the home.
“I had declared it openly as required by Law, in my Asset declaration forms (Annex-4B). Yet the EFCC have announced that they ‘Just Discovered’ my ‘Hidden Estate’! And labelled it a ‘Multi-Billion Naira Estate’! Even though they had been given the Bill of Quantities, showing actual amount spent.
“It is an accepted tradition across the length and breadth of Nigeria, for people to own country/village homes. Given the size of the land and the location of the compound, the buildings thereon cannot by any stretch of the imagination be a “Multi-Billion Naira” palatial estate, as the news mongers would want to portray.”