Showdown As Citizens Take To The Streets To Stand With Buhari, Tuface 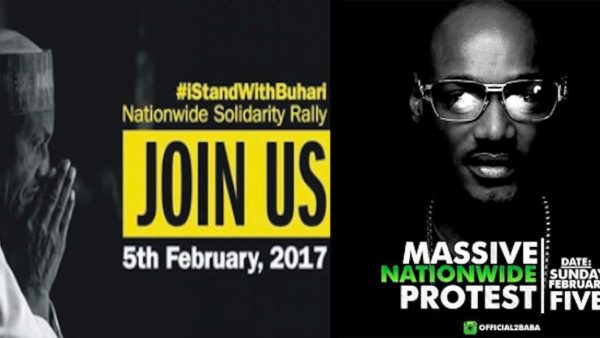 Of the three, #IStandWithTuface, a sort of 2012 remake of #OccupyNigeria and #EnoughisEnough fuel subsidy protest, is leading the pack in popularity and resilience, as the other two appear to be a belated afterthought in response to the growing acceptance of a movement that may well define public consciousness and shape the next general elections in 2019.

The missions of the three groups are well stated. Popular music icon, Innocent Idibia, popularly known as Tuface, is leading a nationwide protest against the government and for good governance; a group, which sponsors are yet to be unveiled, #IStandWithBuhari immediately launched a counter protest in support of the government; while a fairly unknown group, led by those who refuse to be bystanders in the emerging power show, is floating #IStandWithNigeria.

The third group will on Monday, February 6, assembly by 8:00a.m. at the National Stadium, Surulere in Lagos and march to the National Theatre, Iganmu. According to Bemigbo Awala, one of the organisers, “we are marching on the two national icons that epitomize our decline as a nation.

“We want to state very clearly and peacefully that #IStandWithNigeria and the country must work for all of us and all of us must work for Nigeria,” he wrote on his Facebook page yesterday.

Ahead of the clash of the mega rallies, it has been a feverish war on the social media space with each canvassing for supporters and maligning the others.

The group in support of the government had on Wednesday in a Facebook post stirred some controversy when it announced its nationwide solidarity rally for February 5 to take place on the same day Tuface had earlier fixed his protest march.

Not taking the bait, the #IStandWithTuface group immediately shifted their rally to Monday, February 6, to avoid some clash with the president’s supporters, while announcing they intend to hold the march on the day President Muhammadu Buhari would be returning to the country from his 10-day vacation in London.

Despite the controversies generated by the much-publicized protest, including the warning by the Lagos State Police Commissioner, Fatai Owoseni, stopping the protest, the ‘African Queen’ crooner yesterday vowed to go ahead with the protest.

Meanwhile, the police have been advised to desist from becoming tyrannical by attempting to stop the Tuface Idibia-led rally. A pro-democracy and Non-Governmental Organization, Human Rights Writers Association of Nigeria (HURIWA) said the Nigeria police should not attempt to stop an idea whose time has come just as it affirmed that the peaceful nation-wide rallies called by the reputable social crusader and musician, Idibia is in compliance with a plethora of human rights provisions enshrined in the Chapter 4 of the Nigerian Constitution.

In the same vein, activist-lawyer, Ebun-Olu Adegboruwa, yesterday said the police cannot stop the planned mass rally organised by the popular musician, saying it is an attempt to intimidate those who wish to partake in the rally.

“For the information of the police commissioner, Nigeria is a democratic country governed strictly in accordance with the provisions of the 1999 Constitution. Section 39 of the Constitution grants freedom of expression, including the right to be heard and disseminate information.