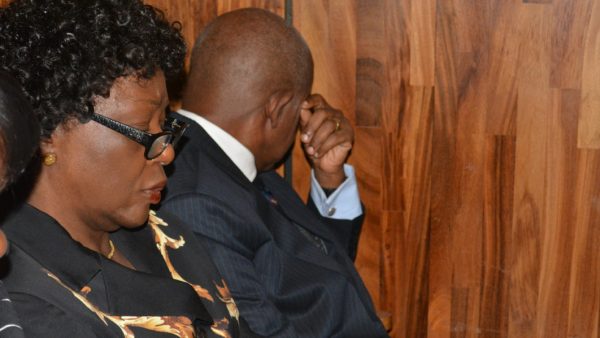 More facts have continued to emerge as three more witnesses gave their testimonies at the on-going trial of Justice Adeniyi Ademola, his wife and a Senior Advocate of Nigeria, Joe Agi.

The three are standing trial for allegations of receipt of gratification and possession of firearms. The seventh prosecution witness, Hajiya Fatimah Shuaibu, wife of former director, Pension Department, Head of Civil Service of the Federation, Shuaibu S. Teidi, yesterday gave evidence before the Federal Capital Territory High Court of how Justice Ademola allegedly demanded N25 million bribe from her husband when he was presiding over his trial on alleged embezzlement of pension funds.

She told Justice Jude Okeke that she received several calls and text messages from unknown persons, demanding N25 million bribe from her. According to her, one of the persons later identified himself as Kingsley O, who she saw once at Wuse Market and he asked her to bring that ‘stuff’ “as tomorrow was the court.”

She further told the court that she linked the calls and messages to Justice Ademola simply because Kingsley was always notifying her of court days and what was happening in court.

“He calls to tell me what will happen in court the next day. I thereby concluded that he might be relating with the Judge. Or, how would he know what is happening in court?

The witness also told the court that Kingsley had once stated that if she fails to comply, “when my husband gets to the court the next day, rain will fall on his file and the Judge will not be sitting. That was when I concluded that he was speaking for the Judge.

Upon questioning, she stated that her husband was in detention for seven months before she wrote a petition to National Judicial Council (NJC). According to her, she was compelled to petition NJC as Justice Ademola refused to vary the N1billion bail condition given to the husband.

During cross-examination the witness was at this time given a copy of the Appeal Court’s judgement to highlight where Justice Ademola was said to be biased.

Having searched the document without success, she then said the word ‘bias’ was not used in the judgment and that it was a slip of her tongue. Afterwards, two officers from two commercial banks were called in to give evidence of money transferred from the account of Joe Agi and Associates. According to the witnesses, the sum of N30 million was transferred from Agi’s account to that of Mrs. Olubowale Adeniyi. Both however admitted that they were not privy to what the money was meant for. They also confirmed that within the time under investigation, no money was transferred to the account of Justice Ademola. The matter has been adjourned till February 8, 9 and 10 for continuation of trial.