Home News Feed Unbelievable! Meet the Young Boy Who Can Actually Pop His Eyes Right...
Facebook
Twitter
WhatsApp
A young boy has become some sort of local celebrity after finding out he can actually pop his eyes out of his head. 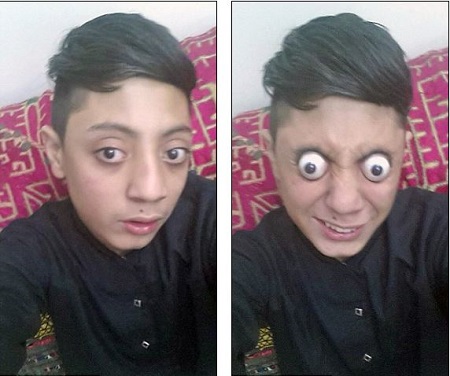 Ahmed Khan, a 14-year-old from Pakistan has become an internet sensation after he filmed himself popping his eye balls out.
The teenager can pop his eyes out beyond eye sockets by over 10 mm.
According to Daily Mail UK, the boy who was talking about his ability, said: ‘Last year, I was doing something and I touched my eye and the eyeball popped out. I thought I had damaged my eye or something but realised it did not cause any harm to my eye.
‘I tried popping the other eye out and I was successful. This seemed fun and after trying a couple of times I got used to it.’ 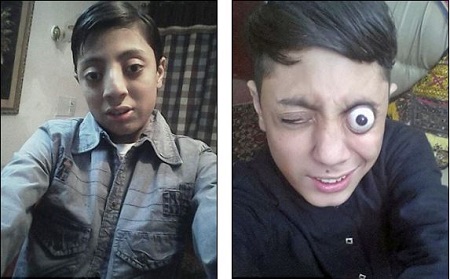 The teen’s eye popping videos have become an instant hit on social media sites in Pakistan and he has even been interviewed on a TV show as well.
Although, he is very popular in his school thanks to his unique talent, many kids are scared of Khan.
‘Many younger kids in school run away when they see me. They are scared of my eye popping,’ he said. ‘Even the girls in school get scared. They think that my eyes will fall out into my hands or something.’
Khan is now ‘eyeing’ a place in the record books.
‘Once I had mastered the art of popping eyeballs at will, I was told by my friends about Guinness Book of World Records. That day it became my aim to break the record,’ he said.
The record for popping eyeballs to the maximum currently belongs to Kim Goodman from the US who can pop her eyes out of her eye sockets by 12mm.
Khan said: ‘My eye popping is way better than the American woman who owns the record and I can break her record anytime.’
Khan’s ophthalmologist initially suggested he stopped the bizarre habit but, after looking at his expertise proptosis, encouraged him to go after the Guinness Record.
The teenager said: ‘I have never visited an ophthalmologist for my vision. God has given me this talent so I am sure he would take care of my eyes too.
‘Only when I do the eye stunts for long, my eyes become a little watery but otherwise I have no problems in popping my eyes out.’
Watch a video of Khan below: