Barack Obama is popularly talked about as the first black President of America. but here are 10 things you never knew about him 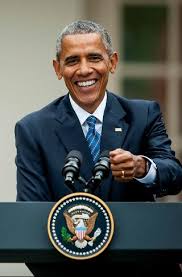 1. Obama was born on Aug. 4, 1961, in Honolulu. His first name, Barack, means “blessed” in Swahili and was also his Kenyan father’s name.

2. He says he hasn’t liked ice cream since working at Baskin-Robbins as a teenager.

3. His childhood nickname was Barry.

4. Obama was the third African-American senator since Reconstruction.

5. He married Michelle Robinson, also a Harvard Law School graduate, who supervised him while he was working as a summer associate in a Chicago law firm. They have two daughters, Malia and Sasha.

6. As an Illinois state senator, he sponsored a bill to require the police to videotape interrogations in capital crime cases. Illinois was the first state to do this.

7. A school in his father’s hometown near Lake Victoria in Kenya has been renamed the Senator Barack Obama Secondary School.