Xenophobia (defined as a strong or morbid dislike of foreigners) is on the rise. The reasons for these xenophobic attacks are  always the same. Most times, the locals feel their black brothers have come to take over their country, resources, jobs and other things.

But the thing is all over South Africa, majority of the companies and businesses are mostly controlled by non-Africans, who are barely ever harassed. South Africans are looting foreigners properties and attacking immigrants especially black ones.

Here are the things you need to know:

1. Between 2000 and March 2008 at least 67 people died in what were identified as xenophobic attacks.

2. In May 2008 a series of riots left 62 people dead; although 21 of those killed were South African citizens.

3. At least five people have been killed and hundreds forced to flee their homes in one of South Africa’s worst outbreaks of xenophobic violence 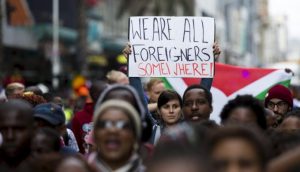 4. The dead included a 14-year-old boy who was allegedly shot during looting and he died at a hospital.

5. 34 people have been arrested for possession of unlicensed firearms and other crimes in the last two days.

7. President Jacob Zuma of South Africa is reluctant to take action against perpetrators. He slammed the assertion, saying his government is addressing social and economic issues brought up by citizens.

8. Migrants are living in fear due to the recent attacks and most of them are running to take shelter in police stations so they won’t be killed.

9.Citizens from countries like Congo, Ethiopia, Malawi, Mozambic, Nigeria, Somali, Zimbabwe and others who fled their home countries to seek ways to improve themselves are mostly affected.

10. Estimates of immigrant numbers vary from 2 million to 5 million, out of a population of 51 million.