THE ALAAFIN OF OYO

1-According to him, the Old Oyo Empire existed without break for 600 years. That’s quite impressive, you know. Especially when you realize that many of the most popular empires, like the famed British Empire, did not last half of that.

2-He was born on 15th October, 1938, and that makes him 74 years old. He was selected among other contestants to become king in 1968 but the government of the day refused and he was not crowned until January 1971, he was working as an insurance clerk then.

3-Aláàfin means one who owns the palace, aáfin.  It can also mean Lord of the Palace, as it is from the aafin that he lords his authority over his people.

4- In times past, the Alaafin was an absolute ruler. Other names for the Aláàfin include Kábíyèsí (the King No One Can Question) Iku Baba Yeye (One Who Can Command Death or Pronounce It Upon His Father or Mother Or He Who Is Mother & Father To Death), Alashe (He Who Possesses Authority), Ekeji Orisha (Second-in-Command to the gods) NB: Translations can vary slightly.

5-Whoever enters the king’s courtyard must remove the shoes. Everyone except the Alaafin must have bare feet in his greeting courtyard.

6-The Kabiyesi’s eldest daughter is name Arewa, meaning The Beautiful One in Yoruba.

7-He contested with 10 other people for the position of the Alaafin. The contest started in 1968 and did not end until 1970. That’s around the time of the Nigerian Civil War. He was declared winner three times but the government initially rejected the ruling of the Oyomesi on all the three occasions. The Oyomesi advises the Alaafin and is the highest decision-making body in the kingdom.

8-He is a boxer, and was a champion in those days (he still has his punching bag in the courtyard) and his favorite meals are amala (yam flour), iyan (pounded yam), abula soup and ogi (pap).

9-In terms of religion, he is a practising Muslim but describes himself as being liberal and a free mixer who was raised up in a strict Christian home and also went to a Catholic school.

10-He has a pond in the palace where he keeps gold fish, and there is also a tortoise in the courtyard said to be hundreds of years old.) 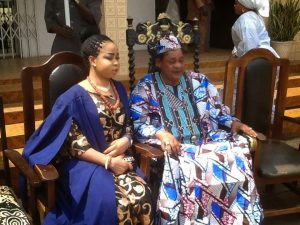