2. “I don’t treat women as objects to be used. I just don’t agree to possess a woman.”

3. “A radical is he who has no sense…fights without reason…I have a reason. I am authentic. Yes, that’s what I am.”

4. “To think how many Africans suffer in oblivion. That makes me sad… Despite my sadness, I create joyful rhythms… I am an artist… I want people to be happy and I can do it by playing happy music. And through happy music I tell them about the sadness of others… So really I am using my music as a weapon.”

5. “Look, we’re very backward. The African continent is degenerating into what I call the era of second slavery. And it’s caused by a conspiracy of Western Governments on one side and illegal African Governments on the other side, operating without a constitution. My Government is like that, a military Government that runs the country by decree.”

6. “Now, there is a lot of violence between the armed forces, the police and the citizens. If I became president now I would immediately pass a law that makes every citizen a policeman or a soldier. Today’s society has so many laws and so many institutions, but Africa needs a different approach before it can develop as a continent.”

9. “…man is here against his will. Where do we come from? What was before us?…when you think you die, you’re not dead. Its a transition.”

10. “I don’t tell lies against anybody. That’s why I always win all my wars.”

11. “Privatization in Nigeria is selling the Government to individuals. And with the debt equity swap, the World Bank is ruining my country with what it owns; it means my country is on the market. I’ve never seen that before, historically. It’s happening in Nigeria, Ghana, and these leaders accept this arrangement. Which makes me feel that they are agents for the Western system: they do everything, they have the guns to persecute, and people become poorer and poorer, which is making life difficult for Africans.” “That’s why I use politics in my music. That’s the only way a wider audience will get acquainted with the important issues. It makes sense culturally as well. In Africa, we don’t sing really about love. We sing about happenings. That’s the tradition: there are no love songs like ‘Darling, Kiss Me.” “It just shows how low the mentality of my country’s leaders was. I thought they had developed a little bit of sense.”

12. “A Nigerian senator just told me : “If even only 5000 Nigerians started imitating Fela, it would soon be very chaotic here !” “Fela : No, it would be a revolution!”

13. “To be spiritual is not by praying and going to church. Spiritualism is the understanding of the universe so that it can be a better place to live in.”

14. “I want peace. Happiness. Not only for myself. For everybody.”

15. “Bleaching of the body to look lighter is immoral.” 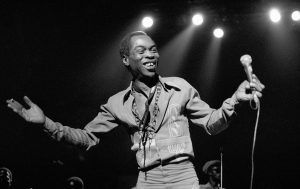