It was a very horrific mood in Libya as Twenty-two people lost their lives and at least 100 others wounded during a fight between rival smuggling gangs on Libya’s Mediterranean coast. 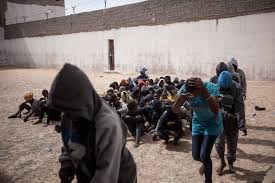 Authorities believe the dead are migrants and not smugglers, as most of them were sub-Saharan Africans.

The latest deaths are in addition to the 140 bodies washed ashore in the Libyan city of Zawiya.

The International Organisation for Migration said the number of migrants leaving Libya for Italy has risen to more than 50% in 2017.