Home News Feed 4 Ex-Miitants Employed as Lecturers by Nigerian University
Facebook
Twitter
WhatsApp
The Amnesty programme of the previous administration has gained a commendable effect with the employment of former militants as lecturers of a Nigerian university after they graduated with First class degrees. 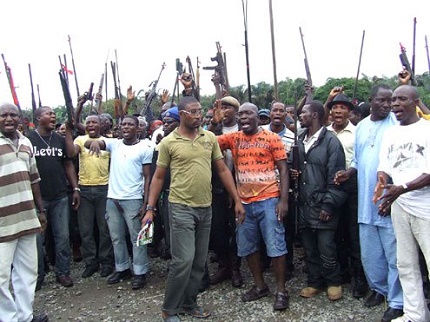 Four former militants have been employed as lecturers at the Benson Idahosa University in Edo State after they graduate with First Class degrees.

The militants were some of the ones that terrorised the Niger Delta region but dropped their arms to embrace the Presidential Amnesty Programme aimed at rehabilitating them and providing a chance for them to be educated.

Vanguard reports that Brig-Gen. Paul Boroh (rtd) who is the co-ordinator of the Presi¬dential Amnesty Programme (PAP) and Special Adviser to the President on Niger Delta Affairs made this disclosure in Abuja.

“In fact, the Benson Idahosa University retained as lecturers, four of our students who had First Class. The performance of our students abroad was even more stunning. A total of 454 of them graduated mainly from British universities with 20 having First Class and 41, Second Class Upper.”