43 persons have been arrested by the Lagos State Task-Force on Environment for alleged adulteration and seized tankers suspected to contain 2.5 million litres of adulterated diesel at Alausa, Ikeja.

The arrest was confirmed to newsmen by the chairman of the task force, SP Olayinka Egbeyemi, on Sunday.

“The Lagos State Commissioner of Police Fatai Owoseni has directed that all those arrested in connection with this adulterated diesel business be immediately charged to court.”

He said the task force acted on petitions submitted to his office on the illegal activities of the suspects.

According to Egbeyemi, the oil bunkers are operating at Plot 8, Elephant Cement Way, Secretariat, Alausa, Ikeja.

He said the 43 oil bunkers were caught while they were allegedly mixing diesel with kerosene with the aim of selling the adulterated product at a reduced price to the public.

The chairman said that preliminary investigation uncovered documents (receipts) which they had been using for the illegal business for over seven years.

Egbeyemi said that the adulterated diesel was supplied to the public, particularly big companies, across the state.

He, therefore, urged the public to report to the appropriate government authorities any illegal or criminal activities around them through the Lagos Emergency Toll-free lines — 112 or 767. 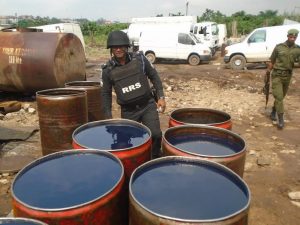